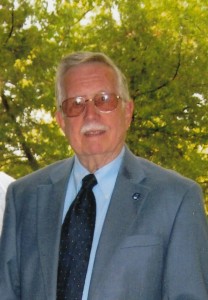 Glen E. (Ed) Smith, born December 6, 1930, in St. James, MO, to George R. (Shanty) and Peggy (Knight) Smith. The family moved to Springfield in his first year and he has been a resident since that time. He was married to Peggy Sue (Edge) Hall on May 25, 1984 who also preceded him in death. Ed passed peacefully in his home Friday, March 6, 2015.
Ed graduated from Springfield Senior High School (CHS) in 1948 and from SMS (MSU) in 1959. He enlisted in the U.S. Air Force in 1951 and served six years of active duty as a navigator/weapons system officer. He then transferred to the active reserve where he served another 30 years before retiring with the rank of Major.
Ed retired from the Springfield Public School District on Dec. 31, 1995, from the position of accounting department manager after 25 years of service. Other employment included: Vice-president of financial services, Drury College; finance supervisor, DESE; business manager, Springfield Family Y and business consultant to several not –for-profit organizations. He also worked many summers at the Ozark Empire Fair in admissions accounting.
Ed was active in community affairs having served the Springfield Public Schools Foundation as business advisor; Springfield Teachers Credit Union as a board member; The Boys and Girls Clubs as an active supporter and board member; Cox Health Systems and the Multiple Sclerosis Society as a volunteer; The Ozark Empire Kiwanis Club as president and board member. He was currently an active board member of the Senior Citizens services fund serving the needs of seniors of the community. He was also a member of the men’s ecumenical prayer breakfast at First and Calvary Presbyterian Church and thoroughly enjoyed the congenial fellowship and thoughtful atmosphere found in the group.
He was a Christian with membership in the High Street Baptist Church during much of his life and had a special affection for older members, especially of the Beacon class. He currently attended National Heights Baptist Church where he coached youth basketball and had many friends there.
His parents and sister, Sue Nelle Roehr, preceeded him in death. Survivors include sons Ben (Kim), Neal (Joan), daughter Amy Beth, step-son Kirk Hall – his computer techie- (Lenette); step-daughter Keely Millstead (Gary); a brother, Charles (Pat); grandchildren Jeff (Maria), Amanda, Paige, Erin and Mitchell Smith; Garrett (Abbey) and Kannon Millstead and Vance Hall; great grandchildren Quinn and Sawyer Smith. Ed also had several nephews, nieces, cousins and many friends.
Services will be at National Heights Baptist Church on Tues., March 10 at 10:00. Visitation will be on Mon., March 9 from 5:30 – 7:30 at Greenlawn North. Burial will follow the funeral at White Chapel Memorial Gardens.
Donations suggested to the Boys and Girls Clubs of Springfield or the youth programs at National Heights would be a thoughtful remembrance.