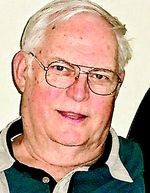 Harold Lee Lawson, 75, of Springfield, Mo., passed away in his home on Friday, November 20, 2009. He was born October 29, 1934, in Monroe County, W.V. Harold graduated from Crowder College in Neosho, Mo., in 1979. He was a First Sergeant Strategic Air Command for the United States Air Force and was a veteran of both the Korean War and the Vietnam War. He retired in 1972, after after 20 years of service. On November 1, 1953, in Albuquerque, N.M., he was united in marriage to Cora Larue Bingham. He was a member of The Church of Jesus Christ of Latter Day Saints. Harold was preceded in death by his brother, Curtis Lawson; and sisters, Lena Bratton, Avis Staton and Irene Harry. He is survived by his wife, Cora Larue Bingham; children, John and Colette Lawson, David Lawson and Marti Smith, Cora and John Hall, and Michael and Shushana Lawson; 11 grandchildren; 15 great-grandchildren; brother Johnnie and Opal Lawson; and sister Shirley and Buck Jones. Funeral services will be held at 10 a.m. Wednesday, November 25, 2009, in The Church of Jesus Christ of Latter Day Saints, 4450 S. Farm Rd. 141, Springfield, Mo., with burial following at 1 p.m. in Missouri Veterans Cemetery, 5201 Southwood Rd. Visitation will be from 6 to 8 p.m. Tuesday, November 24, 2009, in the church.