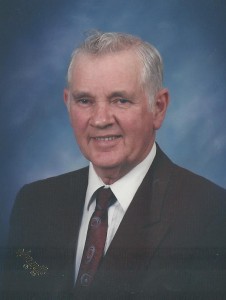 Harold F. Wright, 80, of Springfield, MO., passed away on Sunday May 15, 2016. He was born on June 2, 1935. He was preceded in death by his parents, James B. Wright Sr., and Elva H. Wright. Brothers and sisters, Loren Wright, Mardel Bussard, Verlin Wright, and Eldon Wright.
He is survived by his wife, Helen F. Wright of Springfield; three daughters, Mary Hoffman, Anita Smith, and Traci Littlewood; two sons, Alan (Beverly) Esterline, and Darryl Esterline; a brother, James (Evelyn) Wright; Two sisters, Mildred (Jay) Rippee, Marilyn (Bob) Cates, 12 grandchildren, 14 great- grandchildren, and many more extended family and church family members.
He was firm in his faith and a member of the Macedonia Baptist Church for 25 years. He was a hard worker. His hobbies included fishing, playing golf, spending time with his family, spending time in his garden, going to the gym, ride his bicycle, water aerobics, and bowling. He was a Mason and worked for Consumers for 19 years. He owned 2 grocery stores, and worked for other stores as well. He worked in maintenance and self- employment. Harold always stayed busy. He will be dearly missed!
There will be a visitation Wednesday May 18, 2016 from 6:00 p.m. to 8:00 p.m. in Macedonia Baptist Church in Springfield, MO., with a memorial service Thursday May 19, 2016, 10:00 a.m. Services have been entrusted to Greenlawn Funeral Home South.