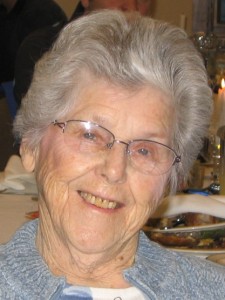 Hazel Irene Tripp, 94, entered into the presence of the Lord at 4 a.m. on Tuesday, November 25, 2014 at The Manor at Elfindale. She was born on January 28, 1920, in Madison County, AR, the eighth of ten children born to the late John and Ollie (Acord) Rodgers. Hazel was united in marriage to Gurvies Erman Tripp on February 8, 1943 in Ozark, AR and to this union was born three sons. Hazel and Gurvies were married for 63 years before his passing on October 18, 2006. A long time member of Calvary Temple Assembly of God in Springfield, MO, Hazel served many years as a teacher in the Toddler Department. At the time of her death, Hazel was a member of Central Assembly of God in Springfield, MO. Hazel was an exceptional homemaker and cook. She loved having the family over for holidays and birthdays and preparing delicious home cooked meals. In their retirement years, Hazel and Gurvies finally got to do something that they didn’t have the time or the money for in the past and that something was to travel. With one or more of their sons going along as the tour guide, trips were made to such places as Hawaii, Glacier National Park, the Canadian Rockies, the Smoky Mountains, Washington D.C., and the East Coast. They also took several Caribbean cruises. Although Hazel experienced the effects of Alzheimer’s for nine years, she was always able to quote her favorite scriptures or sing a favorite hymn. We know today she is singing “When We All Get to Heaven” with the heavenly choir. Hazel is survived by her three sons: Gurvis Tripp, Jr. and wife Nancy, Jim Tripp and wife Carolyn, Kenneth Tripp and wife Sandy; six grandchildren: Kirk Tripp, Gregg Tripp and wife Brenda, Angela Benson and husband DeWayne, Kimberly Bradford and husband Jeff, Dustin Tripp and wife Stacey, and Jordan Tripp and wife Nikki; and four great-grandchildren. Preceding Hazel in death were her parents, her husband Gurvies, her three brothers: Charlie, Woodrow, and Calvin; and six sisters: Mable, Edna, Lucy, Minnie, Thelma, and Edith. The family would like to express appreciation for the excellent care provided to Hazel while she was at The Manor at Elfindale. Also, special thanks are extended to the staff of Seasons Hospice. A visitation will be held on Friday, November 28, from 6 to 8 pm at Greenlawn Funeral Home North on North National in Springfield, MO. The funeral service will be Saturday, November 29 at 10 am at the Greenlawn North Chapel.