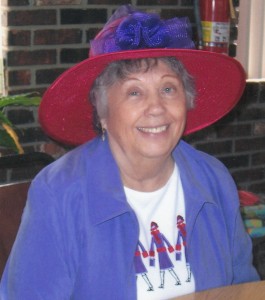 Helen Juanita Tucker, age 77, of Carl Junction, MO, joined her Lord and Savior on Monday, February 9, 2015, surrounded by her family. She was born April 7, 1937 to Ellis and Sylvia (Hildreth) Strait. She was a 1956 graduate of Carl Junction High School. Helen was united in marriage to LaVerne Tucker on January 15, 1960 at the Carl Junction Nazarene Church. Helen’s love for children showed through her working career, she ran a day care in her home for many years, she was the assistant manager for eight years at the Carl Junction swimming pool , and also was a bus driver for the Carl Junction School District for twenty-five years. Helen enjoyed coaching her daughter’s softball and basketball teams, quilting, collecting Precious Moments, and talking on the phone. Helen’s greatest love was spending time with her family. Helen always put everyone else before her self. She was a faithful member of Carl Junction Nazarene.
She was preceded in death by her parents, Ellis Owen Strait and Sylvia and Garrett Burke; two brothers, Henry Strait and Herschel Strait; one sister, Twyla Williams. She is survived by her loving husband of fifty-five years, LaVerne Tucker, Carl Junction; two children, Mark Tucker, Carl Junction and Sherry Adams and husband Clay, Carthage; a special niece Pamela Kelley and husband Bill of Joplin; grandchildren, Craig, Ryan, Erin, Kyle, Alexis, Asher, and Hunter; four great-grandchildren, Bailie, Samantha, Chris, and Addy; Special friends Chris and Emily Collins; two sisters, Margaret Hall and Bobbie Nutt and husband Melvin both of Carl Junction; one brother, Leonard Strait of Carl Junction; four sisters-in-law, Peggy Strait and Juanita Tucker both of Carl Junction, Virginia Rach, Spokane, WA, and Phyllis DeMond, Moravia, NY; one brother-in-law, Larry Hawk, Atlanta, GA; and a host of friends and family.
Funeral services will be held at 10:00 a.m., Saturday, February 14, 2015, at Carthage Nazarene Church, Carthage, MO with pastors Clair Uitts and Dustin Ledford officiating. Visitation will be held from 6-8 p.m. on Friday, February 13, 2015 at Carthage Nazarene Church. In lieu of flowers, memorial contributions may be made to Carl Junction Nazarene Church or Gideons International.
Services have been entrusted to Greenlawn Funeral Home North, Springfield, MO.