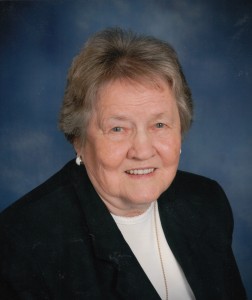 Helen Lorene (Montgomery) Putman went to be with her Lord on March 28, 2015. She was 83 years old. Helen was born March 13, 1932 to Paul and Amanda Burns Montgomery in Springfield, M O. She graduated from Springfield Senior High School in 1950. On November 19, 1953, Helen was united in marriage to Richard J. Putman. To this union were born 4 children: Lynn Ann, Kevin James, Keith Richard and Wesley Gene.
In her early years, Helen was an active member at East Avenue Baptist Church participating in the young people’s group and Baptist Young Women. Early in their marriage, Helen and Richard became active members at Pleasant Home Baptist Church where she worked in Bible School, Women’s Missionary Union and Sunbeams. In 1974, Helen became a member of Hamlin Memorial Baptist Church and was an active member there until illness kept her from attending. Helen enjoyed being with family, plus quilting, sewing and bird watching.
Helen was preceded in death by her parents; her husband Richard of 40 years; two sisters: Martha Cates and Olivia Wade. She is survived by her children: Lynn and Mark Scott, Kevin and Kathy Putman, Keith and Susan Putman and Wesley and Brenda Putman, all of Springfield. Eight grandchildren: Jennifer and Pat Ostergren, Springfield; Teresa and Shaun Richards, Lyons, CO; Bryan and Charith Scott, Rogersville; Melissa and Sam Lambeth, Fair Grove; Jeffrey and Stefanie Putman, Pleasant Hope; Amy Putman, Springfield; Julie Putman, Springfield; Jodie Putman, Kansas City. Eight great-grandchildren: Elisabeth Santos, Carter Ostergren, Graysen Scott, Hunter, Lily and River Lambeth, Sofie and Ainsley Putman. Also one sister-in-law Carolyn Harshfield, and several nieces and nephews. Helen was looking forward to the birth of two great-grandchildren in the very near future.
All services will be held at Greenlawn North Funeral Home. A visitation will be held on Tuesday, March 31, 2015 from 6:00 to 8:00 pm with the funeral on Wednesday, April 1, 2015 at 10:00 am. Burial will follow at Bellview Cemetery. Online condolences may be left at www.greenlawnfuneralhome.com