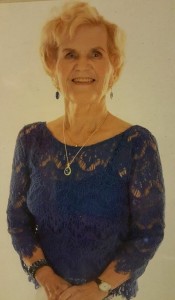 Helmi Pratt, 83, passed away Wednesday, July 1, 2015, in Tammela, Finland. She was born September 11, 1931, in Salmi, Finland to Johannes and Olga (Rusi) Aistola. She grew up in various locations in Finland as she and her family fled from the advancing Soviet Army during the Winter War (1939). Helmi and her family returned to their home when the Finnish Army repelled the invading forces, only to become refugees once more in 1941 when the Soviet Army attacked again. Eventually her homeland Karelia was ceded to the Soviet Union, but it remained Finland in her heart.
Helmi graduated from high school in Finland and worked in Helsinki for a few years before moving to England where she met her husband, Allan Pratt, an American Air Force soldier stationed there. They were married May 29, 1954, in Braintree, England. As an military family, they moved to Germany; Scranton, Kan.; and Shreveport, La. until Allan retired in 1970. In Scranton, Allan and Helmi farmed, operated Burlingame Truckline, and raised greyhounds for racing. They continued to produce winning greyhounds as they moved to Abilene, Kans., and Kimberling City, Mo. They retired to Lantana, Fla. After Allan’s death in 2011, Helmi split her time between there, Kimberling City, and Finland.
Besides her beloved husband, Helmi was preceded in death by her parents and her siblings Alvi, Julia, Aune, Raisa, Leo, Flego, and Aleksander. Surviving family members include sisters, Silja Elvingsson of Sollentuna, Sweden and Siiri Kosonen of Helsinki, Finland; two daughters, Celia Rowland, of Raleigh, N.C., and Jennifer (Steve) Henry, of Lincoln, Neb.; two sons, Daniel (Traci) Pratt, of Kimberling City, Mo., and Gary (Kellee) Pratt, of Lawrence, Kan.; nine grandchildren; five step-grandchildren; one great-grandchild and a multitude of nieces and nephews who adored her. A graveside committal service will be held at the Missouri Veteran’s Cemetery, Springfield, Mo, on July 24 at 2 p.m. A celebration of her life will follow at 3 p.m. at Greenlawn Funeral Home East in Springfield. Memorials may be made to the Finlandia Foundation Florida Chapter through Sari Mustonen, 1011 10th Lane, Greenacres, FL 33463.