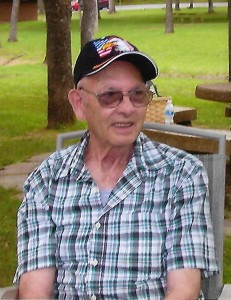 Henry Jackson (Jack) Vest was born January 11, 1935 in Polk County, Missouri to Homer and Effie (Slate) Vest. He went to his heavenly home on April 16, 2016 at Mercy Hospital Lebanon, Missouri.
Jack was the youngest of six born to Homer and Effie: Murl Olson, Rena Stokes Elliott, Marie Downs, Claude Vest and Homer Clyde Vest, all of which preceded him in death.
Jack grew up in a time when things were not easy and this was especially hard with the death of his father, Homer, when Jack was 14. Jack managed to make it through 8th grade before having to go to work alongside his mother, Effie, to make ends meet. This created such a loving bond, until her death in 1972.
Jack was a hard working, loving, kind and generous man. (Did we forget to mention stubborn!) His health failed at a young age but he gave it his all every day. Jack was very crafty with his whittling and fixing things. Jack enjoyed his gardening and the love of the outdoors with his travels with his wife Barbara, after retirement. Jack was a man of few words, but when he spoke you would pay attention because of his wisdom and cleverness. His advice was something to take note of.
Jack is survived by his loving wife and caregiver, Barbara Johnson Vest, of 38 years. Two children; Deborah (Vest) Witt and Cliff Vest, from his first marriage, four children he gained from his marriage to Barbara; Kerry Beard, Terry (Beard) Ortega, Walter Beard and James Beard, that he loved as his own; 9 grandchildren; 12 great grandchildren; his four legged friends, Benny and Megan; nieces and nephews and a host of many friends.
Funeral service for Henry Jackson (Jack) Vest will be 2:00 P.M. on April 19 , 2016 at Pitts Chapel, Bolivar, Missouri. Visitation will be held on one hour prior to service from 1:00 – 2:00 P.M. Burial will be in Flemington Cemetery, Flemington, Missouri.
Family and friends may leave condolences at www.greenlawnfuneralhome.com. Arrangements have been entrusted to Pitts Chapel, Bolivar, Missouri.
In lieu of flowers, the family requests donations to The American Heart Association or The American Cancer Society.