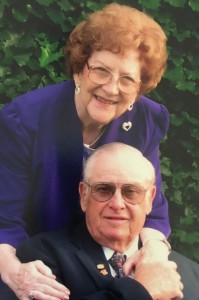 Irlene Bonnell (Wells) Yarbrough, of Strafford, MO, passed away Thursday, April 21, 2016 at Mercy Hospital surrounded by her family. She was preceded in death by her husband Leroy on September 19, 2007.
Irlene owned and operated her own floral and cake decorating business for over 20 years. She loved history and was a member of the Strafford Historical Society and a founding member of the Strafford Senior Center.
She is survived by her children, Raedonna Graham, Becky Yarbrough, Danny and Jimmi Yarbrough, Rick and Marcy Yarbrough, Cheryl Scroggins and her husband Steve and an honorary daughter Melissa Cotter Shirley. Irlene is also survived by her grandchildren Mitisha Phillips, Clayton Waller and wife Jessica, Nattelia Mitchem and husband Noble, Dixie Crawshaw and husband Willy, Emily Mathis, Dustin Yarbrough and wife Jennifer, Casey and Ricky Crawshaw, Tina Carbo and husband Matt, Heather Reardon, Kodie and Brandan Poyneer, Rachelle McGinnis and husband Chad, Cole Yarbrough and Ariel, Chace Tuck, McKenzie Scroggins and several great grandchildren, nieces and nephews. She is also survived by her brothers Marvin Wells and wife Barbara and Melvin Wells and wife Roxanna.
The Yarbrough family would like to thank the 7A staff at Mercy Hospital for the tender and compassionate care given to Irlene.
A celebration of Life will be at 3:00 P.M. Saturday, April 23, 2016 at Greenlawn Funeral Home East with visitation from 1:00 to 3:00 P.M. before the service.