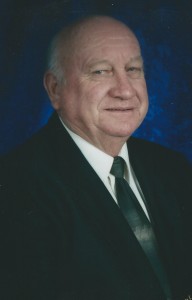 Jack Edward Keithley of Spokane, Missouri son of Otto & Haskell Keithley of Branson, Missouri was born on December 3, 1935 and went on to be with our Lord on June 27, 2016 on his darling Shirley’s birthday at his home.. He was 80 years of age.
He was a lifelong resident of the area with a legacy that words cannot describe. His work for the Lord was his passion along with preaching, writing and singing songs. He pastored 10 different churches, done many weddings and many funerals. He was an ordained minister with Bible Way Association. Jack was a hero in his children’s lives, was a strong man and made things come together in his work as Keithley Construction and Shirley’s Family Restaurant where he also made many wedding cakes for area residents. He was united in marriage to Shirley Ann Hammers on March 28, 1953 and to this union was born six children.
Survivors are five children; Gale Edward Keithley and Eddie Dean Keithley both of Spokane, Missouri, Janice Fay Keithley of Spokane, Missouri, Debora Sue Keithley of Highlandville, Missouri and Teresa Ann Keithley of Roswell, New Mexico. One brother, Junior Dean Keithley of Highlandville, Missouri and a sister, Linda Marie Cummings of Walnut Shade, Missouri. He has 13 grandchildren and 24 great grandchildren. Jack was preceded in death by his wife, Shirley Keithley, his parents, twin daughter, Joyce Kay Bolin and one brother, Donnie Eugene Keithley.
Funeral services will be held at 1:00 PM, Friday, July 1, 2016 at Greenlawn Funeral Home Branson with Bro. Freddy McCoy, Bro. Roger Melton, Bro. Brian Cook and Bro. Johnny Holt officiating. Burial will follow in the Highlandville Cemetery under the direction of Greenlawn Funeral Home in Branson.
Visitation will be from 6:00 until 8:00 PM, Thursday at Greenlawn Funeral Home in Branson.
Memorial contributions in lieu of flowers may be made to the family and sent or left at Greenlawn Funeral Home in Branson.