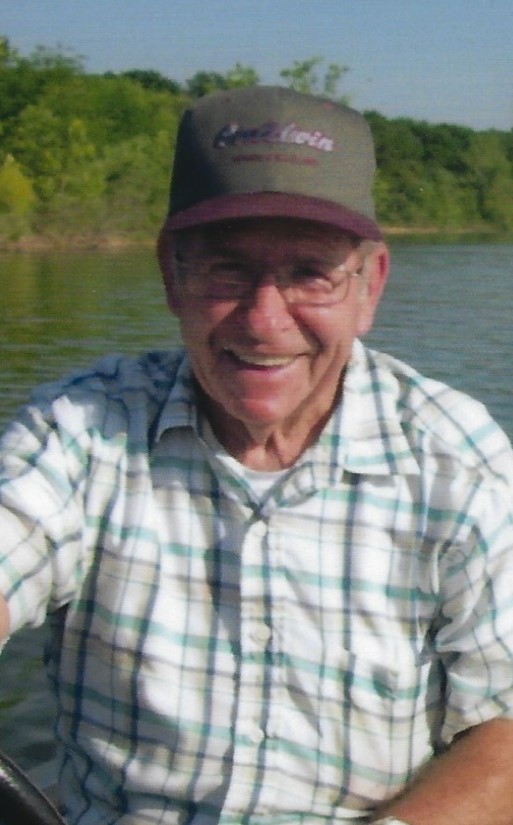 James Howard Swearengin, born December 16, 1934, went to his Heavenly Home on
September 23, 2020. Howard was born in Fordland, MO to his parents Albert Swearengin and Ruby Dalton Swearengin. Howard had six siblings; brothers Clifford, Bill, Darrell, and Freddie, and sisters Mary and Alberta. Howard had a very large family and enjoyed his time with them immensely. Howard met the love of his life in Carole Jean Demry and they married on December 16, 1956. Carole didn’t want Howard to ever forget their wedding anniversary, so they were married on Howard’s birthday; a day he could never forget. Howard and Carole gave their lives to Jesus Christ at a Rogersville camp meeting in 1962. They were devout in their faith and were members of the Church of God Holiness, which Howard pastored in Fordland, Ava, and Stockton. He held many revivals over the years and served as a board member at Mt.
Zion Bible School. Out of this faith-filled marriage was born a beautiful daughter, Cari Lea, on October 29, 1963. The family would grow to include three grandkids, seven great grandkids, and countless nieces and nephews, which he constantly bragged about to anyone and everyone that was around.
Howard was an Army Veteran of the Korean War. After his time in the Army, Howard worked on his future trade as an electrician and would spend 35 years working for City Utilities in Springfield Missouri. He loved his job. He was a very good electrician and was always willing to help with anything electrical even when not working. Away from work, Howard loved to fish and take his family and friends fishing as well! He especially took great joy in taking family and friends to local fishing holes in Florida and having huge fish fries with their haul. Howard was an avid cattle farmer and enjoyed working on his farm and teaching his grandkids the way of the farm as well. Howard and Carole also loved traveling. They made three trips to Hawaii, They also took a very special trip to the Holy Land, which he would always speak about with such reverence. They were Snow Birds and had a house in Silver Springs, Florida, which they would visit each winter. While in Florida, Howard & Carole loved to host family and friends, and would take them to all of their favorite spots. Howard’s grandchildren were the light of his life. If you were around him for any length of time you would know this, because when talking about them he would light up the room with his amazing smile. Those that were around him could not help but be in great spirits because of his belly laugh, his infectious attitude, or how he made you feel that you were the most important person in the room, no matter who you were. For the past several years Howard dealt with the terrible disease Alzheimers. Howard kept his spirit throughout and handled this disease with grace, as evidenced by the words of his caregivers who loved their time with him.
Howard is preceded in death by his wife, Carole Jean Swearengin, his father, Albert
Swearengin; mother, Ruby Dalton Swearengin; brother, Clifford Swerengin; sister Alberta Swearengin Watson; father-in-law, Roy Demry; mother-in-law, Pearl Metcalf Demry; brothersin-law, Virgil Swearengin, Gene Watson, and Jim Demry; and sisters-in-law, Bonnie Swearengin and Shirley Demry. Howard is survived by, brother, Bill Swearengin and wife Faye; sister, Mary Swearengin; brother, Darrel Swearengin; brother, Freddie Swearengin and wife Bobbi; sistersin-law, Carlene Swearengin and Betty Demry Routh and husband Jim; his daughter Cari Asby and husband Keith of Ozark; three grandchildren: Chris Asby and wife Ashley of Bolivar, Clint Asby and wife Bethany of Bolivar, and Carissa Estes and husband Cody of Ozark, seven great grandchildren: Klayton Asby, Landen Estes, Aiden Asby, Ellsie Estes, Caitlin Asby, Roan Asby, and Emmy Asby, as well as many nieces, nephews, and friends.
Howard was small in stature, but BIG in heart! Howard was a gift to us all here on earth and will be a gift to Heaven as well. Though he will be missed by us all, we would not wish him back, as he is now in his perfect body and mind. Howard lived his life with a servant’s heart and would wish for nothing more than to see all of his family and friends again in Heaven. Oh what a day that will be when we’re able to hear his boisterous vibrato voice again with the Heavenly choir.
Services will be held at Greenlawn Funeral Home East, Springfield. Visitation is from 68pm Tuesday, September 29th. Funeral service will be at llam Wednesday, September 30th. Howard will be buried during a Private Burial service at Springfield Veteran’s Cemetery. Gary Swearengin and Darrel Swearengin will oficiate. Pallbearers will be: Tim, Caleb, & Isaac Swearengin, Jerry, Jeremy, & Zach Kolb, and Honorary Pallbearer, Steve Swearengin.