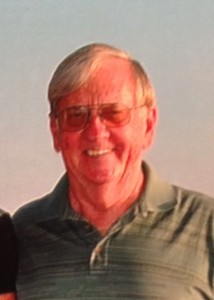 James L. (Jim) Baker, U.S. Navy Retired, Chief Petty Officer, having served 22 years. Jim died November 13, 2015 in a car accident. He was born August 22, 1937 in Dixon, MO, to James H. and Nancy A. Baker. He was their youngest child, having an older brother, Dennis and older sister Hazel.
Sept 22, 1956 he married Nancy Rosenbalm. They have been married 59 years. They have three daughters and one son and their spouses: Jennifer Robinson (Lee) of Brookville, OH, Mark Baker(Lynette) of Collinsville, OK, Lori Stevens (Rob) of Broken Arrow, OK and Shelly Bollinger (Steve) of Sand Springs, OK, also surviving is sister Hazel Jordan, sister-in-law Judy Hart, 14 grandchildren, 13 great-grandchildren and many nieces and nephews. Those preceding him in death are his parents, James and Nancy Baker, brother and sister-in-law, Dennis and Bernette Baker, brother-in-law, John Jordan and great-grand baby, Adelynn Bollinger.
Memorial service will be on Saturday November 21, 2015 at 1:00 pm in Life 360 Church, 3581 S. Kansas Ave. Springfield, MO. Private burial will be in the Missouri Veterans Cemetery with full military honors at a later date.
Memorials are suggested for the Gideons International or the building fund for Life 360 Church.
Since he has now joined” the huge crowd of witnesses of faith watching from the grandstands, let us strip off anything that slows us down or holds us back and especially those sins that wrap themselves so tightly around our feet and causes us to trip up. Let us now run the race, God has set before us. Hebrew 12:1 The Living Bible.
Services have been entrusted to Greenlawn Funeral Home South. Online condolences can be made at : www.greenlawnfuneralhome.com