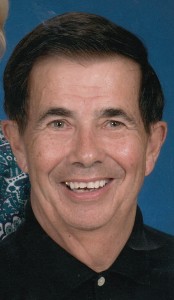 James “Jim” Leon Ludden, 80, passed away on Monday, July 4, 2016 at Strafford Care Center in Strafford, MO after a long battle with Alzheimer’s disease.
Jim was born on August 18, 1935 to Albert and Bernice (Johnson) Ludden. He graduated from Shellsburg High School in Shellsburg, IA in 1953, and spent his working years as a Building Trades instructor, game warden, and tool and die maker. In July of 1963, Jim was united in marriage with Judy Burghart. During their nineteen-year marriage, Jim and Judy had one son, Lee (Debbie) Ludden of Gilbert, AZ, and three daughters; Jen Studley of Urbandale, IA, Gretchen (Mike) Pargeon of Traer, IA, and Heidi (Dirk) Podhajsky of Traer, IA. Later in life, Jim met and fell in love with Kay (Robbins) Grier. Jim and Kay were married in Springfield, MO on January 13, 2001. They enjoyed family trips, fly fishing, Sunday services at National Heights Baptist Church, and simply spending time with one another. Kay stood by Jim’s side and was a loving caregiver and fierce advocate for him throughout his battle with Alzheimer’s disease.
Jim will be remembered for always being active. He loved the outdoors and was an avid fisherman and hunter. Jim had his private pilot’s license and was a certified scuba diver. He enjoyed playing racquetball and basketball, and was a talented woodworker and “tinkerer.” Jim was always willing to help others. He loved his family and will be missed deeply by them.
Left to cherish Jim’s memory are his wife, four children, and his two stepchildren; Tracy (Billy “Vic”) Vickers of Springfield, MO and Brian (Barb) Grier of Webb City, MO. Jim is also survived by his six grandchildren; Caitlin Studley, Erica Podhajsky, Emily Pargeon, Olivia Pargeon, Brett Podhajsky, and Maggie Vickers; a sister, Linda Geater, and a half-sister, Nancy Sundby.
Jim was preceded in death by his parents; a half-sister, Janis (Poynter) Hartman; a half-brother, Lanny Ludden; and grandparents, Leon “Lee” and Luella (Swaim) Ludden, and James and Anna (Wendel) Johnson.
In lieu of flowers, the family requests that donations be made in Jim’s memory to the Alzheimer’s Association online at http://www.alz.org/ or by mail at Alzheimer’s Association National Capital Area Chapter, 8180 Greensboro Drive, Suite 400, McLean, VA 22102 (checks payable to “Alzheimer’s Association”).
Funeral services will be Friday, July 8, 2016 at 3:00 p.m. at Greenlawn Funeral Home North, with visitation 2 to 3 p.m. before services. Burial will be in Greenlawn Memorial Gardens.