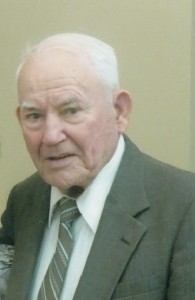 James Leonard Eddings, age 87, of Billings, MO, passed away Sunday, November 30, 2014 at his residence. He was born November 18, 1927, in Springfield, MO, to Henry and Cordia (McDaniel) Eddings. He was a member of Harvest Ministries. He served in the United States Air Force during WW II. He was a minister for 64 years. During that time he built a Home Missions church in Boulder, CO where he pastored for 12 years. In 1969 he assumed a pastorate in Mountain Home, AR where he pastored until his retirement in 1999. James was known as a Master Builder. During his years in Boulder he built prestigious custom homes in the Rocky Mountains. In his spare time, James enjoyed gardening and farming. It was not uncommon for his home to be surrounded by chickens, cattle and other various animals. He was preceded in death by his parents, his brother Richard, his sister Jessie, his eldest son Ronald and granddaughter Michelle. James is survived by his wife of 67 years, Imagene; four sons, Michael and his wife Cynthia of Ozark, MO., Larry and his wife Rebecca of Willard, MO., Charles and his wife Debbie of Seguin, TX., Tom and his wife Rhonda of Billings, MO.; sister Allene Hale of Highlandville; 14 Grandchildren, 20 great-grandchildren, 1 great-great-grandchild and a host of other family and friends. Funeral services will be held at 10:00 am, Wednesday, December 3, 2014, at Greenlawn Funeral Home North, Springfield, MO with Pastor Larry Eddings officiating. Burial will be held in Hopewell Cemetery, Rogersville, MO. Visitation will be held 6:00 to 8:00 pm on Tuesday, December 2, 2014 at Greenlawn Funeral Home North. Services have been entrusted to Greenlawn Funeral Home North, Springfield, MO. Online condolences may be made at www.greenlawnfuneralhome.com.