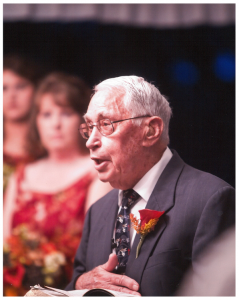 James Monroe Epps, age 95, went home to be with His Lord on Monday, June 6th 2016 -D Day – at 3:51 pm. He was born November 13th, 1920 in Kansas City, MO. He was the 3rd child of 8 children born to Barbara Ann MaCombe & William Epps. He served his country in the Navy during WW II on a battleship in the Pacific Theater. He was a patriot and loved his country, but he was a soul- winner, loved to preach, he loved the Lord, his pastor and church family even more.
Brother Epps was saved in a tent revival held behind the old 2nd Baptist Church in Poplar Bluff, MO where he was also baptized. He was called to preach in 1949 & attended the Southern Baptist College in Walnut Ridge, Arkansas.
His first pastorate was the Center Hill Baptist Church at Doniphan, MO in 1950. He pastored 15 Churches in Mississippi, Tennessee, Iowa, Illinois, Arkansas & Missouri. He was a school teacher at many l & 2 room schools during his early ministry. He and Maxine joined the Berean Baptist Church in Springfield in2004 where he served faithfully as a deacon for several years. His ministry spanned a total of 66 years.
He was preceded in death by his wife, Maxine, after 72 years of marriage. He was also preceded in death by an infant son, Jimmy; 1daughter Barbara Kendrick of Wentzville, MO; 3 brothers, 2 of whom were also preachers and his 3 sisters.
He is survived by 1son Jerry & wife Yu-Mei of St Charles, MO and l daughter Pauletta Marshall of Springfield who lost her husband Claude on June 6th, 2015; one son-in-law Al Kendrick of Wentzville, MO. Also surviving are 3 grandsons, 3 granddaughters; l0 Great Grandchildren and 2 Great Great Grandchildren. He is also survived by his younger brother Paul and wife Jeannie of Florissant, MO and a host of other relatives and church family.
Visitation will be held from 6:00-8:00pm, Thursday, June 9, 2016 at Berean Baptist Church in Springfield. A funeral service will be held Friday, June 10, 2016 at 2:00pm at Berean Baptist Church in Springfield. If unable to attend, the service will be live streamed at www.bereanSGF.org. In lieu of flower memorials may be given to Berean Baptist Church Missouri Fund.
A second funeral service will be Saturday, June 11, 2016, 2:00pm, at Memorial Baptist Church in Poplar Bluff, Missouri with interment to follow in Poplar Bluff City Cemetery.