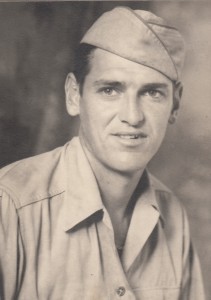 James Paul Shelledy, age 94, of Willard, MO, passed away Wednesday, October 28, 2015 at Manor At Elfindale after a long blessed life, with his daughters’ by his side. He was born January 6, 1921, in Willard, MO, to Charles and Ethel (Trantham) Shelledy. He was retired from Frisco Railroad after 37 years. He served in the U.S. Army during WWII.
He was preceded in death by his loving wife of 70 years Alma (Lathem), his parents, a great-grandson: Joshua Slatten, and by his three brothers and two sisters. He is survived by his daughters; Kathy Shelledy and Paula Forshee, both of Springfield, MO and a son; Jim Shelledy, Bolivar, MO. four grandchildren; Monica Slatten (John), Shelley Cramer, Adam Shelledy (Stephanie) and Blake Shelledy, three great-grandchildren and one great-great grandson, as well as numerous nieces and nephews. He is also survived by his very good friends; Connie and Dennis Goeller. The family would also like to acknowledge and thank the staff at Lakewood Assisted Living and The Manor at Elfindale.
Funeral services will be held at 10:00 a.m., Monday, November 2, 2015, at Greenlawn Funeral Home North, Springfield, MO. Burial will be held in Robberson Prairie Cemetery. Visitation will be held from 9:00 to 10:00 a.m. before services on Monday, November 2, 2015 at the funeral home. Services have been entrusted to Greenlawn Funeral Home North, Springfield, MO. Online condolences may be made at www.greenlawnfuneralhome.com.