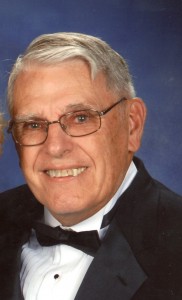 James (Jim) Walter Sapp, Jr. 82 passed away on Friday, June 5, 2015 in Springfield, MO. Jim was born March 26, 1933 in Springfield, MO. He graduated from Greenwood High School in 1951 and then graduated from the University of Missouri-Rolla in 1958. He served in Korea while he was enlisted in the U.S. Army. Jim was a chemical engineer for McDonnell Douglas and retired from there after 30 years of service. He served as an elder and lay-minister in his churches. He also was involved with the Ozarks Model Railroad Assn. (OMRA). Jim married Barbara Fern (Crandall) on March 16, 1956 in Grace Methodist Church and they celebrated 59 years of marriage earlier this year.
Jim was preceded in death by daughter Karen Louise Bub. He is survived by his wife Barbara, his children Vicki and spouse Rick Huffman and Debbie Mason. He is also survived by 10 grandchildren and 9 great-grandchildren, a brother John Richard and spouse (Becky Lee) Sapp, and a sister Jacquie and spouse Chuck Yedinak, and 5 nieces and nephews.
Visitation will be at 10:30 a.m. on Wednesday, June 10, 2015 with services to follow at 11:30 a.m. at Covenant Presbyterian Church, 2441 South Lone Pine, Springfield, MO. 65804. He will be laid to rest at a later date.