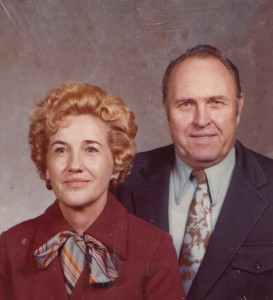 Jauleta Ward, 88, daughter of Fred and Ruby Ipock, was born March 18, 1926, and went to be with the Lord on March 13, 2015. Jauleta was married to John Dee Ward, June 29, 1946. She was a member of Glenstone Baptist Church for almost 60 years. She was preceded in death by her parents; her husband of 52 years, John Dee Ward; one brother, Wayne Ipock; and one sister, Freda Philpott. Jauleta is survived by her daughter, Sandra Delaine Baughman and her husband Jack, three grandchildren; Jeff Hill and his wife Adele; Jack Baughman Jr., and Michelle Hurst and her husband Gary; seven great-grandchildren, and five great great-grandchildren; her brother, Frank Ipock and his wife Betty; along with a host of family and friends. She will be missed by everyone who knew her. Visitation will be Tuesday, March 17, 2015, 6:00-8:00pm, at Greenlawn North Funeral Home. Funeral services will be Wednesday, March 18, 2015, at 10:00am, also at Greenlawn North. Interment will follow in Greenlawn Memorial Gardens.