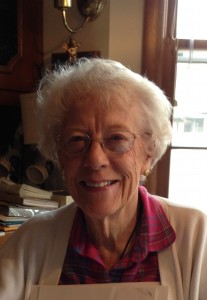 Jean W. Stokke passed away July 1, 2016. She was born September 3, 1929 in Waubay, South Dakota to Abraham and Welthy (McGhie) Hawkins.
She attended South Dakota State College, where she worked as secretary in the journalism department. On March 24, 1951, she married James Stokke, and they moved to Fort Wayne, Indiana, where they were both employed by General Electric. In 1972 James was transferred to Springfield, Missouri. Jean was an elder and active member of Southminster Presbyterian Church, and a member of Chapter ER of the P.E.O. Sisterhood. Jean was always kind and ready with a hug and an encouraging word for all. Many homebound friends were cheered by her coming to visit with a happy smile and a flower.
Preceding her in death were her husband, James; her parents; her 24 year-old son, Robert; her 54 year-old daughter, Janet; and her brother and sister-in-law, Andrew and Connie Hawkins. She is survived by nephew, Andrew Hawkins, Jr., nieces, Sandra Hawkins and Karen Stout, and many dear friends.
Memorial services will be at 10:00 a.m. on Friday, July 22, at Southminster Presbyterian Church, 2245 S. Holland Avenue, Springfield, Missouri 65807, followed by burial in Hazelwood Cemetery. In lieu of flowers, if desired, memorials may be made to Southminster Presbyterian Church, or a charity of choice.