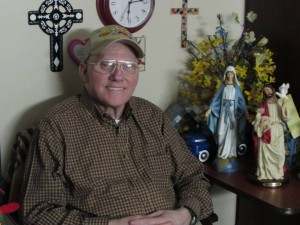 Jerry Lee Brown was born on March 11, 1952 in Springfield, Mo to Thurman Jerry (Buddy), and Evelyn Pearl Brown. He passed on May 6, 2016 at the age of sixty four. His memorial service officiated by Bill Mitchell will be located at Greenlawn Chapel Springfield, MO on May 14th at 2 pm with viewing immediately prior to the service at 1:30 and a brief graveside following at Greenlawn North Cemetery. He was born into a large family of eight children, the fifth child of Buddy and Evelyn. He has three younger sisters Glenda Marie Brown (deceased), Mary Lucille Butler of Springfield, MO and Delores Fay Berretta of Montgomery, Texas, and four older sisters Virginia May McCurtain, Wilma Sue Kinkade, of Springfield MO, Cleta Maxine Souders-Mitchell of Huntsville, MO and one older brother Harold Franklin Griffith (deceased). Jerry is also survived by eight nieces, Tonya Ann Linthacum of Columbia,MO, Stacey Lynn Souders (deceased), Evelyn Pearl Standiford, Lisa Kay Cooper, Elizbeth McCurtain, Regina McCurtain, Ruby Griffith and Maryann Griffith of Springfield, MO, Six nephews, Toby Griffith, David Griffith, Steve Dewayne Lawson, Michael King, Roy Jones, Raymond King, Eric McCurtain and Timmy McCurtain of Springfield, MO, and eight great nieces, nine great nephews and one great great nephew.
Jerry was a nature lover and enjoyed the outdoors and was a true friend of wildlife, often rescuing mistreated animals both wild and domestic and nursing them back to health. Jerry could spin a story, and had a dry sense of humor with a signature grin and an engaging smile.
Even though he was a man of modest means Jerry was a gift giver he love to save and search for nice inexpensive items to buy or things he could make for family and friends. In his childhood growing up he loved working at a greenhouse with flowers and plants and as he grew, he loved to walk and bicycle ride all over Springfield. He was a checker player and a big fan of western movies and John Wayne. He also had a unique taste for unusual furniture and an artistic streak that led to a specialty of painting birdhouses later in life as he struggled with severe physical conditions that limited his mobility. An Evangelist David Ring had a big impact on Jerry as he identified with and respected him as a man who may have had a speech defect but was not afraid to speak up about the Lord and his faith, the serious issues, inadequacies and limitations of a hard life and dealing with what you been given.
Jerry was a hard worker, but new how to take a break, and was a non-complainer later in life who did what he could to assist caregivers who attended him…….often not wanting to bother them with his struggles and needs. He had a hospital reputation of being a great patient and a very sweet man. Jerry worked hard in using what he had in a losing battle with lung disease and Cerebral Palsy that compromised his God-given abilities and limited his capacity. But this did not stop him from living life the best way he knew how. He should not have lived as long as he did but he proved time after time that Doctors could be wrong when they said “he was not going to make it this time”.
Jerry’s favorite scripture verse was John 3:16 and even though Jerry Lee Brown finally succumbed. He got to go Home and see the one who made him and saved him face to face. Those who knew Jerry, have been enriched in ways we may only understand until later in life, But God has given us an opportunity to learn from Jerry’s un-ending struggle that life is somehow worth fighting for and that is why he did it for so long.
In lieu of flowers donations should be made to the Jerry Brown burial fund c/o Cleta Souders (sister of Jerry Brown). A receipt will be returned, and any donations made that result in funds over the cost of the service will be donated to The Indigent Burial and Funeral Fund of Missouri.