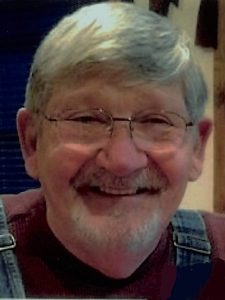 Jerry W. Payne, 72, of Willard was born December 22, 1943 and went to his Heavenly home on Monday, August 8, 2016. Jerry was preceded in death by his parents Olin & Flora Payne. He is survived by his wife of 28 years, Wanda Payne of Willard; two brothers and three sisters: Pat & Lois Payne of Stamps, AR, Jack & Charlotte Payne of Serepta, LA, Peggy & Ken Kenly of Waldo, AR, Judy Jackson of Taylor, AR and Martha & William Massey of Shreveport, LA along with many nieces & nephews and a host of friends.
Jerry was a Vietnam veteran who served in the U.S. Navy, primarily aboard the USS Lake Champlain CVS-39, which was the primary recovery ship for astronauts Pete Conrad and Gordon Cooper aboard the Gemini 5 space shuttle when it returned to Earth. In the past, Jerry volunteered at the American Red Cross, the Southwest Office of Aging and the Missouri Veterans Home and was always willing to help those in need. He had a passion for intarsia woodworking and won first place & multiple top honors in the Scroll Saw Association of the World (U.S. & Canada). He loved fishing, golfing, and traveling. Jerry was a kind hearted soul, loved to make people laugh and was famous for his joke telling– he was always the life of the party. Visitation will be held at Greenlawn North Funeral Home Thursday, August 11 from 5:30pm-7:30pm. A Celebration of Life will be held at Greenlawn North Funeral Home Friday, August 12 at noon and graveside services will follow at 2pm at the Missouri Veterans Cemetery. Jerry had requested that everyone wear casual attire.

In lieu of flowers, donations may be made to the Missouri Veterans Home in Mt. Vernon, MO or the Shriners Hospital for Children.