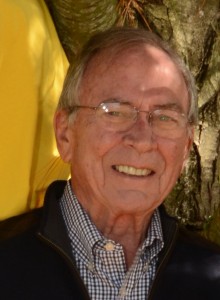 Jerry William Goddard went to be with his Lord on his 74th birthday, April 12, 2016 after a brave battle with ALS.
Jerry was born in Westline, Missouri, in his family home to Vivian and Ralph Goddard. He was united in marriage to the love of his life Norma on May 23, 1964, following his graduation from Central Missouri State University with a degree in Agribusiness. He spent the next 45 years of his life working for Ralston Purina and its subsidiaries. As a sales manager he mentored, trained, and worked alongside many sales men and women. He was a loving, funny, compassionate man who valued his family, his church and his community. He made a profound impact on the people he worked with and as a friend, a mentor, a husband, a father, and a devoted member of his church.
He is survived by his wife of nearly 52 years, Norma; Son, Clay Goddard and his wife, Cindi, their children Alora, Bryson and Ashley; daughter, Mindy Cox and her husband, Tony, their children Kayleigh and David Alday and Rachel; daughter-in-law, Linda Goddard, her children Alexandra and Emery; daughter Danielle Biggers and her husband Anthony, their children Brittany, Lilah and Tyler; Great-granddaughter Ava Grace Alday. He is also survived by his brother Gene and wife Doris and brother Johnny and wife Barbara. He was preceded in death by his father Ralph, mother Vivian, and his loving son Aaron.
Visitation will be held at Glendale Christian Church, April 16, 2016; from 12:00-2:00 pm with memorial service to follow at 2:00 pm. Burial will follow at Payne Cemetery, Nixa, Missouri.
Please, in lieu of flowers, donation may be made in Aaron Goddard’s memory to The Sunshine Brotherhood- Cancer/Crisis Fund for Firefighters. Donations may be made at any Guaranty Bank in Springfield, Mo or to Lost and Found Grief Center.