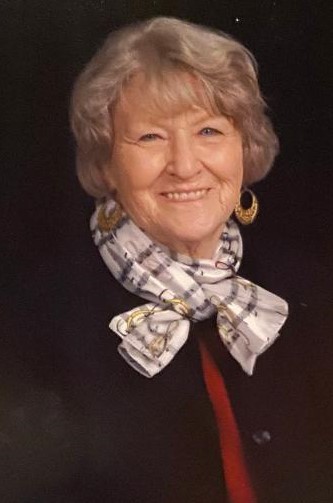 Jo Ann Harral lost her life to cancer on September 30, 2020 peacefully at her home in
Fair Grove, Missouri. She was born on January 25, 1932 in Bado, Missouri to Elvie and Cleo Montgomery.
Jo Ann lived in the Cabool, Missouri area until 1967 when she and husband Hubert relocated to Fair Grove, Missouri where they became active members of the Fair Grove United Methodist Church, and where Jo Ann directed the choir for many years. Jo Ann retired as President of the Springfield Teacher’s Credit Union after 35 years of faithful service.
Jo Ann lived a life guided by faith, which was evident by her generosity and selflessness. She loved her family and friends dearly and never met a stranger. Despite enduring many hardships throughout her life, she exuded positivity, warmth, a contagious smile, and strength. She had a passion for music and inspired every member of the choirs that she directed. She was the matriarch of her family and a treasure to her community. Even though she had three children and two grandchildren, she was a mother/grandmother figure to many family members and friends.
Jo Ann is survived by her daughter, Jana, and her husband David Fox, her grandson
Dustin Fox and his wife Erin and great-granddaughter Jacqueline, her granddaughter Kaia, her sister Shirley Kittrell, and her husband Don, her sister Betty Throckmorton, her brother Gerald Montgomery, her brother Ward Montgomery and his wife Debby, and sixteen beloved nieces and nephews.
She was preceded in death by her husband of 61 years, Hubert, her daughter and son
Kaia and Marty Harral, her parents, Cleo and Elvie Montgomery, her brother, Jackie Montgomery, her sister-in-law Mildred Lewis, her sister-in-law Margaret Montgomery, her brother-in-law Gene Harral, and her brother-in-law Leroy Throckmorton.
A service will be held at Fair Grove United Methodist Church in Fair Grove, Missouri. on Sunday, October 11, at 1:00 p.m. Interment will be at the Bado Cemetery at a later date.
Family has requested that memorials be made in Jo Ann’s name to either Gathering Friends for the Homeless, The Springfield Street Choir or Fair Grove UMC.
The service for Jo Ann will be live streamed on Fair Grove United Methodist Church Facebook. The family requests to please wear a mask due to Covid-19.