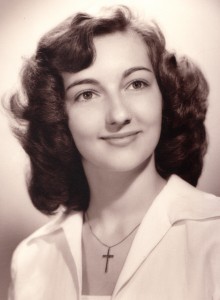 Joan (Hake) Iott exchanged this earth for a place in Heaven at 1:30 pm on Thursday March 31, 2016. Joan’s passing came after a long illness. Due to skilled caregivers, she was able to remain in her home during the illness. Joan was the daughter of Glenn and Audrey (Henderson) Hake, who preceded her in death.
After graduating from Central High School in 1952, Joan went to work for the Frisco Railroad. Working for the railroad ignited Joan’s love of travel, and she spent many hours traveling by passenger train. She had maintained many friendships from her childhood, and from her high school days, and these women often took trips together. These trips were filled with laughter and fun.
Joan married Jerry Lee Iott on August 31, 1956. Much of their courtship was carried out long distance while Jerry served his country in the Navy Air Force. Once they married, they remained “lovebirds” for nearly 56 years, until Jerry’s death in 2011. Joan gave up her job with Frisco after the birth of her first child, Greg, to become a fulltime housewife and mother. Joan loved being a mother and working with her children’s school. She was very active at Bingham Elementary in Springfield where she served as homeroom mother, and also as a Cub Scout den mother.
Joan and Jerry joined St Johns Episcopal Church shortly after their marriage. There they made many lifetime friends. Joan served on the Altar Guild and developed long-lasting friendships. She was a member of St Johns for over 50 years.
Joan loved the arts and was an accomplished artist herself. She was a member of L’Art, a local group sponsored by the Springfield Art Museum. Once again, she made new friends and maintained those friendships for her lifetime. She was a member of the Art group for over 40 years. Her love of art was a positive influence on her daughter, Sherry’s, decision to make Art her own career.
Her absolute love of friends and family provided Joan with many opportunities for travel. One trip especially dear to her heart was with a friend to her homeland of Ireland. They traveled into Scotland and England on that trip, and Joan never stopped talking about all she saw and learned and how much she loved the trip. She and her many friends had regular gatherings each year to celebrate birthdays and “catch up’ on each other’s lives.
Joan’s cousins were like siblings to her—the brothers and sisters she never had. She and the cousins shared their lives and spent many hours just having a good time. One of her friends loved to tell the story of Joan’s, and their own, first pair of high heeled shoes at age 13. Apparently, the girls hung their feet out the car windows, flipping and wiggling their feet to show off their new shoes. Their mothers, rather than being upset, laughed along with them.
Joan was an active person who gave herself fully to the things and the people that she loved.
Both Jerry and Joan cherished their wonderful grandchildren and took great pleasure in spending time with Paige and Colten.
She was a loving daughter, wife, mother, grandmother and friend. She will be deeply missed by all who loved her.
Joan is survived by son Gregory Brian Iott and his wife Candance Hunt Iott; daughter Sherry Lynn Iott; her granddaughter Paige Iott Wade and her husband Jay Paul Wade; her grandson Colten Gregory Iott, as well as several first cousins and a wealth of loyal and loving friends.
Services will be held on Monday, April 4, 2016 at St. John’s Episcopal Church 515 E. Division in Springfield. Visitation will be before the service at 12:00 in the Parish Hall followed by the funeral service at 1:00 pm. Burial will follow at Greenlawn Cemetery on North National in Springfield.
The family wishes to offer their love and gratitude to all those who loved Joan, and who contributed to what Joan described as her “dream life.” In lieu of flowers, the family requests donations to the Breast Cancer Foundation of the Ozarks 330 N. Jefferson and/or the Humane Society of the Ozarks 3161 W. Norton Rd both in Springfield.