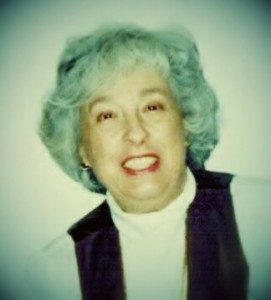 Joan “JoAnn” Shriver Salts passed away September 9, 2015 at the age of 93. She was born December 4, 1921 in Joplin Missouri to Paul Wesley Shriver and Mary Louise Dunwoody Shriver as their only child. The family moved to Springfield, Missouri when Joan was very young. She graduated from Central High School, then attended Texas State College for Women and Drury College, graduating from Southwest Missouri State College in 1969 with a B.S. degree in Music Education.
She was preceded in death by her husband Allen E. Salts and a son James McElhany, who died in infancy.
Joan’s first love was music, and her entire life was devoted to playing her violin and teaching. Several of her private students went on to careers as professional musicians. She was a retired Springfield Public Schools string teacher and was the first conductor of the Springfield Youth String Orchestra. She received the Studio Teacher of the Year award from the Missouri Chapter of the American String Teachers Association in 1995.
Joan was a member of the Springfield Symphony Orchestra for 60 years, 36 years as principal of the second violin section. She was a member of the Symphony String Quartet and played with them until 1990. She also played with the Ft. Smith, AR Symphony, the Northwest Arkansas Symphony, the Little Rock Symphony and the Springfield Regional Opera. She played in Branson, Missouri for several acts including Kenny Rogers, John Tesh and Wayne Newton.
She loved to garden, stamp collect, read and travel. She loved the outdoors and often wished had been born during the pioneer days. She had a tender heart for stray animals, taking in many dogs and cats through the years, even raising some baby possums whose mother had been killed.
She is survived by her children, Katy Dimos Raits (Eric), Homestead FL, Frederick “Marty” Burris (Cathy) , Loveland, OH, Patricia Burris Goforth (Larry), Springfield, MO, Michael Ross Burris, Ft. Worth, TX; her grandchildren, Matthew Dimos, Jonathan Dimos, Todd Burris, Molly Jacob, Emily Humphrey, Jennifer Goforth, Patrick “Max” Goforth and Allen Burris, and nine great grandchildren, Lucia, Mercedes, Ezra, Harrison, Sawyer, Duncan, Adele, Lincoln and Hudson.
Joan was a generous, adventurous, remarkable woman who will be missed by all who knew her.
If anyone so desires, donations may be made to the Springfield Symphony Orchestra or C.A.R.E
“See ya later alligator…”