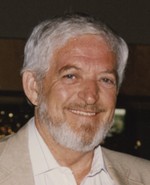 Jobie V Goslee, born June 23, 1931, departed this life July 30, 2009. His last few weeks were peaceful and spent in his home surrounded by family and loved ones.
Jobie was preceded in death by an infant brother, his parents Dora and Vernon, ex-wife and mother of his children Pat Latimer, sister-in-law Evelyn and grandson Corporal Jessy Guy Pollard. Jobie is survived by his Sweetheart and companion of 26 years Sydney Croxdale and her son Chris Akins, and Jobie’s four children; daughter Lynne Lee and her husband Gerry Lee and their children Greg, Christie and Abby, daughter PJ DeWitt and her husband Alan and child Whitney, son Steve and his wife Mona and their children Jacob, Katie, Grace, Carley and Luke, son Mike and his wife Laurie and their children Sarah and Mason and Jobie’s Brother Derry and sister Kay Blair and her husband Robert and Aunt Margaret whom he adored.
Born and raised in Skidmore Missouri, Jobie served in the Navy before graduating SMS. During college he fell in love with Springfield and made it his home. Jobie worked in Personnel Management most of his career and founded TEMCO, an Employee Leasing company, which is still thriving over 25 years later. He was heavily involved with Shriners and Scottish Rite as a 33rd Degree Mason.
Jobie loved and was deeply loved by his family. He was very proud of his grandchildren and they gave him great joy. Honesty and integrity were defining traits of his character and was respected and admired by business associates.
A great man, Jobie was a leader, patriot and community supporter. Jobie was compassionate, generous, kind and a gentleman in every respect.
Visitation is at Greenlawn East, Sunday August 2nd from 5:00 to 7:00 pm immediately followed by a Rose Croix service. Services will be held Monday August 3rd 10 am at Greenlawn East followed by the burial with military honors at Greenlawn Memorial Gardens.
Donations in honor of Jobie may be made to:
Scottish Rite Foundation, Southern Jurisdiction, USA, Inc.
1733 16th Street, NW
Washington, DC 20009
Or
Ozarks Food Harvest
2810 North Cedarbrooke
Springfield, MO 65803
Online condolences may be made at www.greenlawnfuneralhome.com or office@temcoteam.com.
Thank you for your prayers, we miss him dearly.