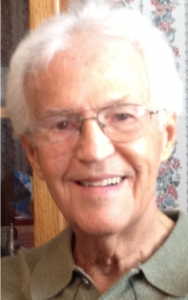 Joe Wayne Gideon, 87, of Springfield, passed away in his home December 13, 2014.
Joe was born April 28, 1927 in Harper County, Kansas, to Joe and Helen Gideon who preceded him in death.
Joe was raised in Manchester, Oklahoma, where he also attended grade school and part of high school, graduating high school in Anthony, Kansas.
During World War 2 he served in the US Air Force for 2 years. He attended Bethany College, in Lindsborg, Kansas, graduating with a Bachelors degree in Music. After college graduation, he began his business career in Hawaii, where he lived for 2 years. He returned to the mainland where he started his 30 – year career with Equifax, Inc. During his tenure with Equifax, he lived in various locations in the Midwest, ending up in Springfield, Missouri in 1973, where he resided until his death.
Preceded in death by his wife Annabelle, Joe is survived by his son, Ray Gideon of Springfield, Son, Steve Gideon and wife Glenna of Olympia, Washington. Daughter Michelle Kearnes and husband Bill of Ozark. Daughter Paula Harper and husband Michael of Woodland Park, Colorado. Brother, Richard Gideon and wife Colette of Springfield. Along with many Grandchildren, Great Grandchildren, Nieces and Nephews.
Services will be held on Saturday, January 10, 2015 at 11:00 AM at Walnut Lawn Church of God, 554 West Walnut Lawn, Springfield, Missouri. Services have been entrusted to Greenlawn Funeral Home South.