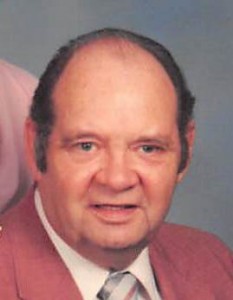 John Dillon (J.D.) Woody went home to be with his Lord and Savior Jesus Christ on Wednesday, June 15, 2016, and to join his beloved wife who went to heaven several years ago. He was born on February 25, 1924 in Sedalia, Mo. He subsequently moved to Springfield, MO, where he lived his entire life.
He was preceded in death by his mother Grace (Woody) Eastwood and father Samuel Woody, sisters Emma Jean Woody, Edna Marie (Woody) Link, brothers Samuel Woody, Earl Woody and his beloved wife of 63 years, LaVerne (McMullen) Woody.
He is survived by his two daughters, Mrs. Carole (Woody) Tracy and her husband Kenneth Tracy, Mrs. Linda (Woody) Lambell and her husband Jim Lambell, three grandchildren, Lorie (Tracy) Miller and her husband Rev. Dennis Miller, Chris Tracy, and Amy Lester; six great grandchildren, Courtney Cook, Greg Neal and his wife Brianna Neal, Emily (Miller) Gregory and her husband Zach Gregory, and Ellie Miller. Three great-great grandchildren, Gregory Neal, Alani Neal and Henry Gregory.
Mr. Woody was a Navy veteran of World War II and also served in the Korean War. He was very patriotic and loved his country. He always worked hard for his family, community and church. A month after he turned 17, he married the love of his life, Grace LaVerne McMullen, whom he often called “Lovey”. She called him “Johnny”, so they were Johnny and Lovey to each other. They had a romance and marriage like no other which lasted 63 years before she passed away. He was a faithful employee at The Assemblies of God Headquarters for nearly 50 years, from 1940 until his retirement in 1989. At the time of his retirement he was the Quality Control Supervisor for the entire printing and production area of the organization.
He also had another ministry in the form of music. He wrote several religious songs that were beautifully written. His wife co-wrote a few of his songs and played the piano. They were his private songs, and were never published.
John (aka: J.D.) started out as a song leader at about age 14 at South Side Assembly of God Church for Rev. David Hastie, who became a beloved friend of the family. That would be the start of his ministry that lasted his entire life. In the early 1950’s he became a pastor of a very small church in Rogersville, MO, while keeping up with his work at Assembly of God Headquarters. He was always available to his congregation as well as his fellow employees for guidance, counseling and prayer. After pastoring in Rogersville, he preached many revivals, always reaching out to the community in addition to his fellow church members at the church that became his home, Calvary Temple.
Some years after his retirement, it became necessary for his dear wife, LaVerne to go to a local nursing home (fka: Christian HealthCare). Mr. Woody was so dedicated to her care at the nursing home, he was there on a daily basis. He also volunteered as chaplain and pastor to many of the residents. This became his ministry for some 20 years, and became the final chapter in his long preaching career. He held Bible Study and Church Services, played his guitar, and sang for the residents, and was a blessing to everyone he came in contact with. He performed several final services for residents over the years for families that did not have a church affiliation. He always performed these services with dedication and love. At the time he was no longer able to minister to the people at the nursing home, he stayed in a residential apartment there for some two years. When it became necessary for him to have more care, he decided he wanted to be with family. He turned to his granddaughter, Amy, and moved to her house, where he became a blessing to her family, had Bible Study with her and her family, and enjoyed being with his great-great grandchildren regularly. He stayed with Amy until he passed on June 15, 2016.
Visitation will be at Greenlawn Funeral Home East Springfield, MO from 6 – 8 p.m., Tuesday, June 21,2016. Funeral services will be at 11:00 a.m. Wednesday, June 22 at the funeral home. Burial will be in Missouri Veterans Cemetery Springfield, MO with full military honors.