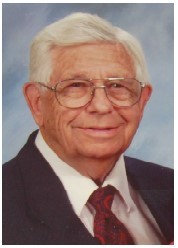 John Ray Tranbarger was born in Pike County Mo on April 8, 1929 son of Ray and Mae (Howell) Tranbarger and died August 11, 2019 in Springfield Mo. He was preceded in death by his father in May 1988, mother in 2002, sister Phyllis Wright in 2012, and his wife Faun Aleen in 2012.
John married Faun Aleen Pettey on December 17, 1950 and their union was blessed by five sons, James (Geneva), John (Linda), Phillip (Theresa), Mark (Ginny), and Joe (Cheyenne); thirteen grandchildren, Valerie Lyons (Joe), Glen (Carmen), Sara Mayfield (Wes), Joshua, Andrew (Hillary), Bradley Adams (Amber), Tiffany Lindley (Brett), Whitney Langdon (Brad), Richard Peterson, Dawn Daniels (Conn), Gabrielle Schambach (Kenneth), Michaela, Krista Westfall; and 13 great grandchildren.
He graduated from Bowling Green Mo High School in 1947, received his B.A. degree at Westminster College in 1951, attended Louisville Seminary and was ordained to the gospel ministry by the Missouri Presbytery, US. In 1951, and earned his Doctorate of Ministry at Dubuque Seminary. He served as pastor of four rural Presbyterian churches until 1959 when he accepted the call to be the first pastor of Hillcrest Presbyterian Church in Springfield where served until his retirement in 1994. Following his retirement he served various churches in John Calvin Presbytery until his final retirement in 2017.
John served on the City Council of Springfield from 1979 – 1981 and as a volunteer policy chaplain with Springfield Police Dept from 1972 – 2017.
Funeral services will be at 10:00 a.m. Thursday, August 15, 2019 at Hillcrest Presbyterian Church: 818 East Norton Road, Springfield, Mo. Burial will follow, in Greenlawn Memorial Gardens. Visitation will be Wednesday evening from 5:00 p.m. to 7:00 p.m. at Greenlawn Funeral Home North. Memorial Donations may be made to the Hillcrest Presbyterian Church, Children's Services.