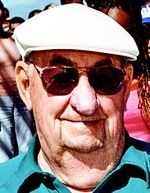 Joseph Fredrick Wolfe
Joseph Fredrick Wolfe, age 81, of Springfield, Mo., passed away Sunday, August 16, 2009 in his residence. He was born August 20, 1927, in Excelsior Springs, Mo., to Lawrence John and Ada (Sims) Wolfe. He was a member of Ascension Episcopal Church. Joe was a Navy World War II Veteran, and owned J.F. Wolfe and Associates Elevator Consultants for over 50 years, where he still worked until his death. His parents, Lawrence John and Ada Wolfe; and a brother, Dick Wolfe, preceded him in death. He is survived by his wife, Lucille Wolfe of Springfield; four children, Joe Wolfe and wife Glenda of Prattville, Ala., Lawrence C. Wolfe and wife Trish of Springfield, Vicki Jenkins and husband Randy of Springfield, Debi and Langeloh and husband Mark of Colorado Springs, Colo.; 13 grandchildren; nine great-grandchildren; sister, Delores Peckham of the state of Iowa; brother, Jack Wolfe of Westfield, Mass. Graveside service will be held at 1 p.m. Friday, August 21, 2009 in Missouri Veterans Cemetery. Visitation will be held Wednesday, August 19, 2009, 7 to 9 p.m. in Greenlawn East Funeral Home.