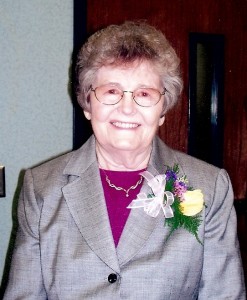 Juanita Bernice (Curl) Foster, 92, died peacefully Friday, December 5, 2014, at Citizens Memorial Healthcare Facility, in Bolivar.
Born October 20, 1922, in Dunnegan, MO, Juanita was the oldest of four children born to Ernest and Mabel (Hopkins) Curl. She married Herbert Leon Foster on June 13, 1944, and to this union was born three sons: Michael, Patrick, and Terrence.
Juanita was saved at an early age at Dunnegan Baptist Church, and from that time on church remained an important part of her life. Everywhere life took her; she always found a church home and had many wonderful memories, often serving as church pianist. At the time of her death she was a member of Calvary Missionary Baptist Church in Bolivar.
Juanita was retired elementary teacher whose career began at Pickel School, a one room country schoolhouse in Polk County. She later taught at Bear Creek near Stockton, Red Bridge Elementary in Kansas City, and High Grove Elementary and Meadowmere Elementary in Grandview. She held a Bachelor of Science degree in Education from Southwest Missouri State in Springfield and earned her Master’s degree in Education from Central Missouri State in Warrensburg. Juanita retired in 1983 after 31 years in the teaching profession.
In the fall of 1983, Juanita and Leon retired to Bolivar where Juanita enjoyed being a part of many organizations. She was a member of Royal Neighbors, Delta Kappa Gamma, Garden Club, and the Missouri Retired Teachers Association. She also spent many enjoyable hours volunteering at the Polk County Library, Pitts Funeral Home, and Citizens Memorial Hospital Auxiliary.
Juanita was preceded in death by her parents, husband, sister-in-law Charlene Curl, brother-in-law Clyde Mayse, and two brothers, Dale and Bueford Curl.
She is survived by her sons and their spouses: Michael and Dixie Foster of Bolivar, Patrick and Debbie Foster of Bolivar, and Terry and Treva Foster of Avon, IN; a sister, Dixie Mayse of Springfield, IL; two sisters-in-law, Neta Curl of Dunnegan and Juanita (Cricket) Curl of Bolivar. Also surviving are nine grandchildren: Jason Foster and wife Shonda of Bolivar; Michelle Tweedie and husband John of Bolivar; Alyssa Foster of Bolivar; Bryant Foster of Independence, MO; Suzanne Evans and husband Shawn of Bolivar; Bradley Foster and wife Kim of Front Royal, Virginia; Bryce Foster of Avon, IN; Brandon Foster and wife Melissa of Plainfield, IN; and Scott Brown and wife Tonya of Bolivar. In addition Juanita is survived by 24 great-grandchildren, two great-great grandchildren, and numerous nieces and nephews.
Juanita will be sadly missed by her family and a host of dear friends.
Funeral services will be held at 10:00 AM Tuesday, December 9, 2014, at Pitts Chapel Bolivar, MO. Burial will follow at Greenwood Cemetery Bolivar, MO. Visitation will be held from 6:00 to 8:00 PM Monday, December 8, 2014, in the funeral home. Arrangements have been entrusted to Pitts Chapel Bolivar, MO.
https://www.tributeslides.com/tributes/show/926QJ6857F8R39CB