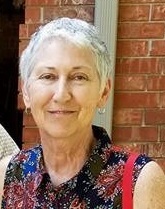 Kate (Kathryn) Ann Bachle (Killeen) of Springfield, MO passed away on October 16, 2018 at the age of 70 after a long hard fought battle with cancer. She passed away welcoming the opportunity to meet Jesus and continue to serve her family as a guardian angel.
Kate was born on October 20, 1947 to Jack and Maxine Killeen in Fremont, NE. Kate spent her childhood in and around Nebraska and Kansas while her father travelled for his job. She graduated from Pius X High School in Lincoln, NE in 1965. She was married and they adopted 3 wonderful children. She loved being a mother and was an amazing to her 3 children, always sewing clothes and making most food and meals from scratch. Over the years Kate held several various jobs alongside her favorite role of mother, she worked as a secretary, a girl’s group home administrator, and a power plant security guard.
She eventually found herself in Auburn, NE where she met her loving husband of the last 31 years, Curt Bachle. The two were married on July 11, 1987. They eventually relocated to Springfield, MO in 1993; a favorite frequent stop along their regular vacation route to the Ozarks. After moving to Missouri, Kate spent most of her days helping care for her grandchildren, tending to her amazing flower gardens, haunting flea markets and cranking out an unending amount of craft projects. She could dream up amazing concepts and bring them to reality, through painting, sewing and often the help of a glue gun.
Kate is survived by her husband, Curt Bachle of Springfield, MO; her mother, Maxine Killeen of Lincoln, NE; mother-in-law, Edna Bachle of Auburn, NE; daughter and son-in-law Bridgett (Breitfelder) and Scott Petzoldt and son Grayson of Omaha, NE; son and daughter-in-law Shane and Kim Breitfelder and children Connor, Emma and Madeline of Lincoln, NE; daughter Jessica (Breitfelder) Lewis and children Janaye, Jadyn, Jordan and Ryker of Springfield, MO; sister Maureen Vaughn (Jim) of Lincoln, NE; brother Pat Killeen (Angie) of Omaha, NE; in addition to several cousins, nieces and a nephew. She was proceeded in death by her father, Jack Killeen and father-in-law Chester Bachle.
Celebration of life will be held on Saturday, October 20th with a visitation at 4pm and service to follow at 5pm both taking place at Greenlawn Funeral Home at 441 West Battlefield in Springfield, MO.