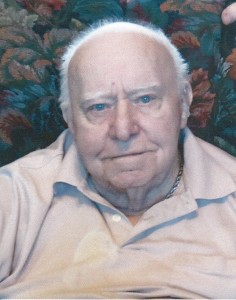 Kenneth Lloyd Powell, 88, of Springfield, MO passed away peacefully on October 28, 2014 at home surrounded by family. Kenneth was born in Springfield, MO on April 13, 1926 to Lloyd and Bessie Powell.

Kenneth married Mary (Imogene) Lister, the love of his life on April 6, 1950. Kenneth’s entire life was built around the love family. Kenneth was a retired Veteran of the Army and served abroad in WWII and the Korean War. Kenneth was a lifelong resident of Springfield after leaving the military to take care of his family which became the whole focus of this life. Kenneth worked for Campbell 66 trucking for 35 years and retired at 58 years old.

After retirement Kenneth did a lot of Carpentry projects for many of his family. Kenneth was a man of many talents; he had the knowledge to be able to build or fix most anything and passed that on to many of his children. Kenneth was always surrounded by his family before as well as after the loss of his loving devoted wife in 2010.