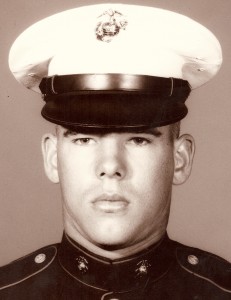 Larry Arlist Livingston was born on August 26, 1945 in Lawton, (Fort Sill) Oklahoma. He was the son of Leonard and Jo Livingston. He died on April 11, 2015 at the family home surrounded by his family and close friends. Larry grew up primarily in Oklahoma and Southwest Missouri.
Larry attended High school in Seneca, MO where he played football for the Seneca Indians. In 1959, as a freshman, he met Morris Lawson, and thus began a lifelong friendship, which later included Shael Sherer Lawson. They enjoyed 56 years of mutual love and respect and many shared adventures. Countless hours have been spent recalling those times over the years, even as new adventures took place.
Larry joined the Marine Corps in 1965, serving 6 months of active duty. He remained in the active reserves until September, 1971. Larry later joined the United States Naval Reserves and in total, served 20 years in military duty. He retired as an E-6. During this time he was recalled to active duty in support of Operation Desert Shield/Storm. He was very proud of his military service.
Larry received a Bachelor’s degree in Business Administration from Missouri Southern State College in Joplin, Missouri while working as a Joplin City Policeman. He then became the Chief Juvenile Officer for the 30th Judicial Circuit, based in Bolivar, Missouri. He retired from this position in 2000.
In retirement, Larry became a business partner with Morris and Shael Lawson in ownership of The Harbor, at Pomme De Terre Lake. This adventure combined his love of life on the water, with his many talents of repair and remodel, plus the bonus of working with his best friends.
Larry was preceded in death by his mother, Jo Livingston and his brother, Jerry Livingston. He is survived by his devoted wife, Bernadette Livingston; daughter, Lorie (Dave Ramsey) of Mason, Ohio; son, Eric (Kara) Livingston of Cape Coral, FL; grandchildren, Nathan and Noah Ramsey and Max and Ryn Livingston; step-daughter, Sarah(Miguel) Salazar of Rockville, MD; step-daughter, Ashey Nenninger of Raleigh-Durham, N.C.; father, Leonard Livingston, Mt.Vernon, MO; brother, Garry(Nancy) Livingston, of Sitka, AK; nephew, Danny Livingston, of Juneau, AK; and niece, Kelly(John) Shaer, of Gainesville, FL.
Larry is also survived by his in-laws; Judy Frentzel, Glenn and Beverly Klipfel, Ron and Kathleen Klipfel, Jerome and Cathy Klipfel, Pete and Darlene Klipfel, Donna and Jerry Conklin, David and Kathy Klipfel, Angela Klipfel, Pat and Kathy Klipfel, and all their children. Larry was a deeply treasured member of the Klipfel family.
Larry loved spending time with his grandchildren, especially fishing with them on the beautiful bridge he built. He was a loving and generous husband, father, grandfather, son, brother and uncle and a loyal friend to Mike and Traci Brown, Mike and Teresa Pitts, Denny and Vicky Corrigan and John and Sharon Kochmeyer. He will be remembered for his truly unique dry sense of humor and his willingness to jump in and volunteer to help family or friends with new projects. He was never without a list of projects on which to work.
We grieve that he is no longer with us, but we celebrate his time on earth that we shared.
In lieu of flowers, donations may be made to the Hickory County Child Advocacy Program % Joyce Worsham Rt. 71 Box 2891, Wheatland, MO 65779, or to The Hickory County Toys For Kids % St. Bernadette Church P.O. Box 167 Hermitage, MO 65668.
Memorial Services will be held at a later date at the Missouri Veterans Cemetery in Springfield, MO. Online condolences may be left at www.greenlawnfuneralhomes.com Arrangements have been entrusted to Pitts Chapel, Bolivar, Missouri.