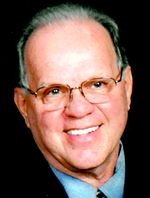 Larry G. Bischoff
Larry G. Bischoff passed away Tuesday, August 25, at home, after a two-year battle with cancer. He was born to Emil and Marjorie Bischoff on September 27, 1942, in Springfield, Mo. Larry graduated from Hillcrest High School in 1960, and Missouri State University in 1964. He was united in marriage to Carlene Sims on December 19, 1964. He worked at the News-Leader for many years delivering newspapers on the north side of Springfield. He also spent more than 20 years building custom homes. For the past 25 years, Larry was self-employed in the financial services industry. He was active in his church, Hamlin Memorial Baptist of Springfield, serving as a deacon. He also enjoyed working on his land and playing with his grandchildren. Larry is survived by his wife, Carlene; son Doug and his wife, Wendy, Houston, Texas; daughter Gina Green and her husband, Tony of Springfield, Mo.; and grandchildren, Lucas, Bailey, Micah and Ruth Ann Bischoff of Houston, Texas, and Nathan and Allison Green of Springfield, Mo. He is also survived by his two brothers and their wives, Leon and Betty Bischoff and Bill and Judy Bischoff, all of Springfield; brothers-in law and sisters-in-law, Ron and Faye Holden of Kimberling City, and Glenda Hays, Freeman and Carol Kleier, and Myria Hart, all of Springfield; as well as 13 nieces and nephews. He was preceded in death by his parents; and a nephew, Steven Bischoff. Funeral services will be at 2 p.m. Friday, August 28, in Hamlin Memorial Baptist Church, Springfield with Pastors Gary Longenecker and Calvin Maberry officiating. Burial will follow in Greenlawn Memorial Gardens. Memorial gifts may be made to Hamlin Memorial Baptist Church, 829 W. Atlantic, Springfield, MO 65803.