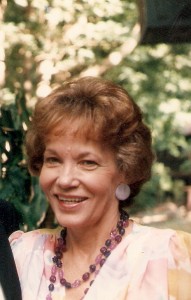 Lauralea Nicholson, age 82, of Willard, MO, passed away Saturday, March 7, 2015 at Mercy Hospital. She was born June 22, 1932, in Lake City, IA, to Harry and Clara Webb. She moved with her family to Branson, Missouri as a child where she worked in her father’s gift shop and restaurant. She married Fred Allen in September of 1955. Lauralea was active in her three children’s school activities. She was later united in marriage to William (Bill) G. Nicholson on June 12, 1987 in Osage Beach, Missouri . Lauralea and Bill were very active in cordinating reunions for the veterans of Company B, these reunions sent them all over the country. Lauralea enjoyed sewing, cooking, painting, playing the organ, and reading mystery novels. Her greatest love was spending time with her family.
She was preceded in death by her parents, Harry P. Webb and Clara Yancey; and her two husbands , Fred H. Allen and William (Bill) G. Nicholson. She is survived by one daughter,Laurie Ryan and husband Jack, Willard, MO; two sons, Dan E. Allen and wife Lynne, Medford N.J. and Scott Allen of San Diego, CA; three grandchildren, Kaitlyn Schwers, Mountain Home, AR, James Allen, Marlton N.J., and David Allen, Medford, N.J.; and a host of family and friends. Graveside services will be at 2:00 p.m., Thursday, March 12,2015 at Springfield National Cemetery.
Services have been entrusted to Greenlawn Funeral Home North, Springfield, MO.