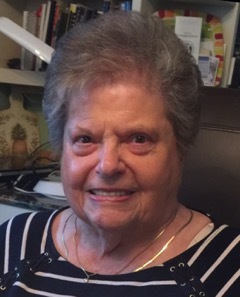 Lena Irene Krog Thompson, 94, Springfield, Missouri, was born May 4, 1924 in Girard, Kansas. She passed away October 20, 2018 at St. Mary’s Hospital, in Jefferson City, Missouri after a brief hospitalization.

Lena grew up in Girard and graduated from Girard High School. Following graduation, Lena worked at the Girard National Bank.

Lena was united in marriage May 29, 1949 to Melvin Moore Thompson. After their wedding, Mel’s career with the United States Soil Conservation Service took them to Garden Plains, Kansas; Parsons, Kansas; Fulton, Missouri; and ultimately in the early 1970’s to Springfield, Missouri, which became their retirement home.

Lena was active and participated in her children’s life as a Boy Scout, Girl Scout, and 4-H leader, and a Sunday school teacher. While living in Fulton, Lena was active in the American Cancer Society and Court Street Methodist Church. After moving to Springfield, Lena acquired her real estate license. She loved the excitement of working with first time homebuyers and the thrill of getting them into their first home. Lena enjoyed serving her community and worked for several decades as an election clerk in Greene County. Her grandchildren and great grandchildren brought much joy to her life. She was loyal to her Buick cars, and thanks to her devoted husband Mel, she never pumped her own gasoline. She was also a loyal St. Louis Cardinals fan.

Services will be held in Springfield at Greenlawn Funeral Home South on Friday, October 26th with a 9:30 AM visitation and 10:30 AM funeral service. Following, burial will take place at the Missouri Veterans Cemetery at 12 PM.

In lieu of flowers, memorial donations may be made to the Weekend Buddy Pack or Senior Care programs at Ozark Food Harvest.