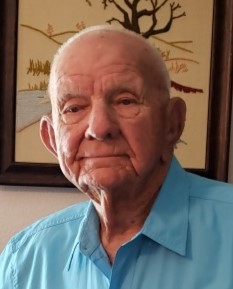 Lenny was born on Nov. 26, 1926 in Islip Terrace, Long Island, New York to the late Gustav and Emma Brandt.  He    was the youngest of four children.  He belonged to the Lutheran Church.  He was a graduate of East Islip HIgh School, class of 1944, where he excelled in athletics.  Upon graduation Lenny enlisted in the U.S. Navy during WWII.  He was assigned to the SEABEES, the construction branch of the Navy, and was stationed at Okinawa till the end of the war. Upon completion of his military service he returned home and worked in construction for EW Howell on Long Island, New York.

Lenny was an avid outdoorsman enjoying all sports including hunting, fishing, boating and golf. Lenny married Florence Andersen in 1949 and they were married for 41 years. In 1975 they moved to the Florida Keys where he lived for 30 years. In 2006 he moved with his daughter to Graff, MO., where he later moved in 2011 to Country Living Assisted Living in Mountain Grove. Lenny was preceded in death by his wife Florence.

Lenny is survived by his two daughters Susan Baney of Milton, FL and Robin Henninger of Graff, MO. Grandchildren Brad Baney and Erica Henninger. Sons-in Law Gary Baney and Mark Henninger. He was a loving Dad and Poppy and will be greatly missed. There will be a Celebration of Life at a later date. The family has entrusted arrangements under the care of Greenlawn Funeral Home South.