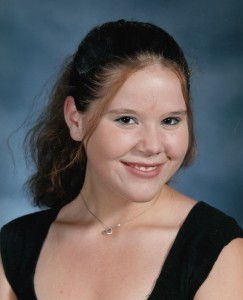 Lindsey Renae Boyer, age 28, of Springfield, MO passed away Tuesday, August 4, 2015, in her home, after a long illness. She was born October 18, 1986, in Springfield, MO to Robert and Donna (Lindsey) Boyer. She was a mother who fiercely loved her children and her family.
Lindsey was preceded in death by Robert Lee Boyer, Lois Laverne Boyer, and Ronald Dean Lindsey. She is survived by her three children: Riley, Ariah, and Lucas Watson, her mother: Donna Lindsey, and her step-dad: David J. Vaughan, her grandparents: Daisy and Walter DeLear, grand father: Raymond Boyer, her brothers: Michael T. Boyer, and his 3 children: Keelie, Braxton, and Brooklynn, Brent L. Boyer, and his daughter: Makayla, her aunt: Shelly Alexander and her cousin: Jacy Sherman.
Funeral services will be held at 1:00 p.m. Monday, August 10, 2015, at Greenlawn Funeral Home North, Springfield, MO. with pastor Richard Orrell officiating. Burial will be held in Rose Hill Cemetery, near Willard,MO. Visitation will be held from noon to 1:00 p.m. on Monday, before services.