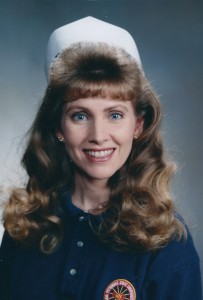 Lisa Ann (Schnelle) Ingram passed away at 8:28 a.m. on Wednesday, December 30, 2015 at Cox South Medical Center in Springfield, Missouri at the age of 54 years, 4 months, and 20 days.
She was born on August 10, 1961 in Lincoln, Illinois to Elmer and Ruth (Guy) Schnelle.
Lisa grew up in Springfield and attended high school at Parkview High School where she met her future husband, David Ingram. Lisa and David went on their first date on October 1, 1976, and later married on June 15, 1979. They welcomed their first son, Michael, on January 15, 1981. In February 1982, David, Lisa and Michael moved to Lamar, Missouri when David started work with Frito-Lay. Then, on March 14, 1983, David and Lisa had their second son, Daniel.
Lisa was a stay-at-home mom and part-time housekeeper the majority of the kids’ childhood. In addition to those responsibilities, in 1992, she decided to go back to school to become a nurse like her mother, Ruth Schnelle. Lisa started taking college classes at Missouri Southern State University in Joplin, Missouri, and then transferred to Pittsburg State University in Pittsburg, Kansas for nursing school. On May 16, 1998, Lisa graduated summa cum laude with her Bachelor of Science in Nursing, was a member of numerous honor societies, and was valedictorian of her nursing class. She went on to specialize in oncology nursing where she was able provide the care, compassion and skill that made her such a great nurse, daughter, sister, mother, grandmother, and friend. In 2011, Lisa and David moved back to Springfield and lived there until her unexpected passing.
Of utmost importance, Lisa had an experience of salvation as a young girl and at the age of 12 was saved by the grace and love of God. She was a member of various Missionary Baptist churches throughout her life, and most recently attended Canaan Missionary Baptist Church in Springfield, Missouri.
Lisa was preceded in death by her mother, Ruth Schnelle, and her father-in-law, Junior Ingram.
She is survived by her husband, David Ingram; her son, Michael Ingram, his wife Angela, and their children Jacob, Adam, and Ruby, all of Halfway, Missouri; her son, Daniel Ingram, his wife Lesley, and their children Carson and Blaine, of Fayetteville, Arkansas; her father Elmer Schnelle of Springfield, Missouri; her brother David Schnelle and his wife Janice of Springfield, Missouri; her brother Mark Schnelle of Springfield, Missouri; and her sister Janice Mettlach of Sarcoxie, Missouri; as well as numerous other loving family members and friends.
Services will be held at 1:00 p.m. on Saturday, January 2, 2016, at Canaan Missionary Baptist Church in Springfield, Missouri, with interment immediately following at Payne Cemetery of Bolivar, Missouri.