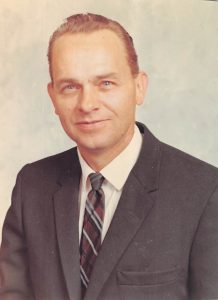 Lloyd L. Beam, 99, went to be with his Lord and Savior on July 20, 2016. He was born June 17, 1917, one of four children born to David and Velvie (Edwards) Beam. Lloyd was married to Mazie Grace Hagar on June 19, 1938. They were blessed with two children, Rebecca Joy (Beam) Sobotka and John L. Beam. He was preceded in death by his parents, wife Mazie, daughter, Becky, two sisters and one brother. Lloyd is survived by his son John and wife Kaye, son-in-law Craig O. Sobotka, seven grandchildren, 12 great-grandchildren, and several nieces and nephews. He worked at Frisco Railroad and Gospel Publishing House in printing. He was a self-taught artist and painted many beautiful landscapes. He also worked in wood crafting and built several grandfather clocks for his family members as well as furniture. He was a member of Central Assembly from 1938 until his passing. He was loved and admired by his family and will be greatly missed. Graveside services will be held July 22, 2016, 11:00 AM at Danforth Cemetery under the direction of Greenlawn Funeral Home North.