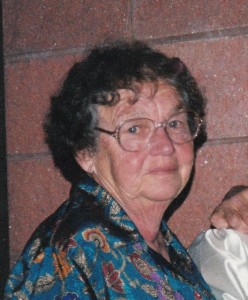 Loretta Bailey passed away in her home on October 8, 2015, surrounded by her family. She was born on October 30, 1932 in Niangua, Missouri. She married Bobbie Dean Bailey on January 23, 1954. They had four sons, each were special to her in their own way. Loretta loved to fish, play slots and read books. Loretta loved her family dearly and cherished her children and grandchildren.
She was preceded in death by her husband, Bobbie Dean Bailey; her parents, Tom and Lucinda Kilburn; two sons, Thomas (Eddie) Bailey and Michael Dwain Bailey; two grandchildren, Bobbie Dean Bailey and Michelle Lee Bailey; one sister, Lucille (Charley) Flint; and one brother in law Hurshel (Vera) Collison.
She is survived by two sons, Max Bailey and Danny Bailey (Maribelle), all of Rogersville; four grandchildren, Jennifer (Chad) Conner of Battlefield, Missouri, Travis Bailey (Tracey) of Kansas City, Missouri, and D.J. Bailey and Marlana Tabor of Rogersville, Missouri; two great-grandchildren, Kolbee (Shorty) and Ryder; one daughter in law, Sheryl Bailey of Strafford, Missouri; one sister, Larella (Chester) Cossins of Brighton, Missouri; one brother in law, Frank (Madelyn) Bailey of Springfield, Missouri; her special son, Larry Lafollette and his family of Strafford, Missouri; and the entire Trogdon family of Strafford, Missouri and a host of nieces, nephews and cousins.
A visitation will be held on Monday, October 12, 2015, from 6:00 to 8:00 PM at Greenlawn Funeral Home North. Funeral services will take place on Tuesday, October 13, 2015 at 1:00 PM at the funeral home with burial at Springfield National Cemetery at 2:00 PM.