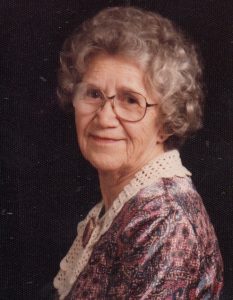 Lorna Mabel Conway was born April 30, 1912 and died September 17, 2016 at the age of 104 years, 4 months and 20 days. Her parents were Oliver and Dora Belle (Summers) Hodges. When Mabel was only two years old, her mother, who was a full blood American Indian Princess, died.

On August 16, 1932, Mabel married the love of her life, Earl P. Conway and on June 25, 1933, their only child, Earlene, was born. Mabel was preceded in death by her dear husband, her parents, two brothers and one sister.

Mabel’s introduction to the bible truth of Jehovah’s Witnesses came in 1941 when she lived in an apartment owned by an anointed sister, Isabelle Smith, here in Springfield. Mabel was baptized in 1941 as one of Jehovah’s Witnesses. She started her preaching using the phonograph. Mabel’s first big convention was in August 1941 in St. Louis, Missouri, when the “Children’s Book” was released. Some years later, due to the fact that her husband worked for the Missouri State Highway Department and they had to move frequently, Mabel lost contact with friends in the truth. But in 1956, again became very active. Her home was a place for the congregation book study, as well as meetings for field service for years, Monday through Friday. Mabel had many circuit overseers and their wives staying in her home, even Brother Jaracz and Malitta of the Governing Body.

Mabel was an accomplished seamstress, making suits, dresses and wedding garments for many inside and outside the congregation. S he was also good at crocheting and was a good cook. But her main interest became the spiritual things.

Mabel “vacation pioneered” many times – 75 hours preaching the first month, 100 hours the second month – which she did over and over. Mabel was overjoyed to see her husband, Earl, baptized in 1965, three years before he died.

Even at the advanced age of 104, Mabel was still active in the service and until about two years ago attended all meetings, was still on the Theocratic Ministry School as a householder, even though she had to memorize her parts due to poor eyesight. Until 2011, she still read all publications, studied all lessons for meetings and underlined answers, even though declared “legally blind,” and used a lighted magnifying glass to do so. Then her sight failed so badly that Earlene had to read all publications, meeting parts and the Bible to her. When the lesson was a question and answer part, Mabel’s sharp mind made it possible for her to answer the question immediately just from hearing it read to her and with her good memory of the Scriptures. Mabel had personally read the Bible through 51 times.

Needless to say, many will miss her sweet smile and energetic demeanor, her sense of humor, kindness to and love for everyone and zeal to tell others about Jehovah’s Kingdom by Christ Jesus. Her hope will be realized when she is resurrected to perfect life here on earth in the Paradise.

A visitation will take place Friday, September 30, from 6:00 to 8:00 PM at Greenlawn North funeral home. Funeral services will be on Saturday, October 1, at 2:00 PM at the funeral home, with burial following immediately after at Greenlawn Memorial Gardens.