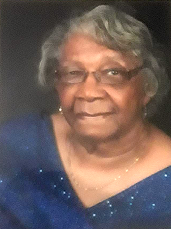 On November 17, 2019, Mabel Parrish, 83, left this life for a higher calling. She was born on January 10, 1936 to the late Cassie Davis and Graham T. Alston. She was raised in Warrington County, North Carolina.
Mabel was married to Sam Parrish in North Carolina and then moved to Washington, D. C., where she gave birth to eight children: Kay (Robert) Parrish of Washington, DC; James (Theresa) Parrish of Springfield, MO; Deborah Parrish, of Billings, MO; Mary Parrish of Washington, DC, Larry (Nicci) Parrish of Upper Marlboro, MD; William, Yvonne, and Yvette Parrish (preceded her in death)
Mabel worked as a domestic helper and a server for Marriott Hot Shot restaurant as she raised her children. She loved to cook for her family and friends. That was her way of showing how much she loved them.
In 1979 Mabel was baptized into the Jehovah Witness faith and became a faithful witness with her brothers and sisters in faith until her death.
Mabel leaves to cherish her memories: Her children, two sisters Nancy Kerney of Warrington, NC and Ann Lee Andrews of Washington DC, (preceded her in death); one brother Haywood (Dorothy) Boyd of Cherry Hill, NJ; one uncle Henry Davis of Camden, NJ; one aunt Florence Alexander of Camden, NJ; 18 grandchildren; 30 great grandchildren; one great-great grandchild; a God child, Christine Roberson (Cookie) of Washington, DC; a special friend, Shirley Spite and a host of cousins, nieces and nephews, and all of her brothers and sisters in faith.