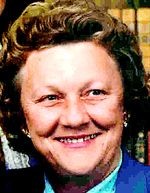 Margaret Elizabeth Reed, age 84, passed away on Sunday, June 21, 2009, at Cox South Hospital after a short illness. She was born on December 9, 1924, in Waverly, Mo., to William & Mary Stoecker. Margaret married George W. Reed on April 12, 1944. Together they raised three children while living in the Strafford area. All those she met loved Margaret. She loved raising her family, gardening, and traveling to Branson with friends. Margaret was a member of the Ladies Auxiliary at the George W Reed Memorial VFW Post 7214 in Strafford. She was preceded in death by her husband, George; three brothers and a sister. Margaret is survived by her children: Gary Wade (Shelia) Reed, Tina Mary Margaret (Ron) Reagan, and Trudy Ann (Steve) Rowden; grandchildren: Eric Fries, Tania Fries, Army Specialist Jason Rowden, and Army Reserve Private Jessica Rowden; six great grandchildren; her brother Bill (Wanda) Stoecker, and many other friends and relatives. Graveside services will be held in Greenlawn Cemetery on North National on Thursday, June 25, at 10 a.m.