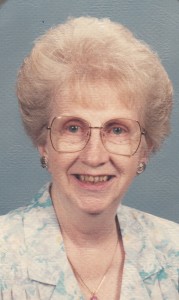 Marjorie Lee Hampton Dyche, Springfield MO, passed away during the early hours of the morning, Sunday, August 16, 2015 in her home at the age of 91. Glory be to our Great God that our loving mother was allowed to pass this life, peacefully in her sleep.

Marjorie was born July 18, 1924 to Paul Vernard and Mildred Miriam Martin Hampton in Springfield MO. She met her future husband, Kenneth Irl Dyche, while in grade school. Both of their fathers worked for the Frisco Railroad. Kenneth visited with the excuse of seeing her brother. After the death of her father, her mother moved the family to Kansas City to join the family restaurant business. During the summers she spent two weeks in Springfield visiting friends, always managing to run into Kenneth. Marjorie graduated from Rosedale High School in Kansas City, KS in 1942 and began working for Paramont Motion Pictures in Kansas City.

The war began and Kenneth went off to join the Seabees. After he returned, they were married September 15, 1946 in Kansas City at Rosedale Methodist Church. They moved to Springfield. Kenneth had resumed his employment with the Frisco Railroad, and as most railroad families they began a series of moves to Memphis TN, then back to Springfield where they finally began their family. Those moves were followed by Amory MS, back to Springfield, Sherman TX, Fort Smith, AR, finally making the last move back to Springfield with their four children in tow.

After marriage, Marjorie became a homemaker and mother, often covering duties of both parents while Kenneth was away on train derailments. They enjoyed taking their tribe on vacations, often on camping trips. Her children grew up with appreciation for music listening to her play the piano. One of her favorite pieces was Liebestraum. She was a gifted seamstress, knitted beautiful sweaters for everyone, avid genealogist, accomplished cook, tole painter, and attained her Private Pilot’s license to help Kenneth fly. They owned and operated Skycaster of the Ozarks and she often assisted him with flying their electronic sign plane, the Word Bird. They flew their Cherokee 180 on many trips to visit their youngest daughter and grandchildren as well as all over the country for Seabee reunions. She put her seamstress talents to use doing alterations and sewing costumes for a local shop, following in the footsteps of her mother who was a professional seamstress. She was quite a manager and enjoyed her children and was extremely excited when her grandchildren came along. The biggest highlight of her last years were visits by her great grandchildren who call Great Grandma “GG”.

Several old friends have offered memorable stories. One was of the little yellow and white Sunbeam Mom used to drive, stuffed kids and their friends and away they would go. That sweater knitting, as she loved to tell the story, was how she got Kenneth away from another high school girlfriend.

Marjorie was a member of First and Calvary Presbyterian Church and a member of the Eastern Star.

Services are entrusted to Greenlawn North. Graveside service will be Thursday, August 20, 2015 at 11 AM at White Chapel with Pastor Dale Murphy officiating.

In lieu of flowers, donations may be made in Marjorie’s name to the Alzheimer’s Association, 1630 W Elfindale St., Springfield MO 65807.

Special thanks go to Dr. Teresa Olson for all of her years of wonderful care, friendship, and encouragement. Thanks also to Woodland Manor staff for making her last years happy and fun.