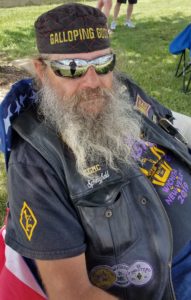 Mark Alan Roemer was born in St. Louis, Missouri on February 4, 1957 to Roland Chester and Myrna Lee (Gullett) Roemer. He passed away on Tuesday, August 18, 2020 at 63 years of age.
Mark was a retired heavy equipment mechanic that had a passion for motorcycles. He was an active member and brother of the Galloping Goose Motorcycle Club. Mark had been riding motorcycles since he was 14 years old. There was often more than just he and his wife’s motorcycle in their garage, as Mark loved to build and repair bikes as well. Mark was an avid history buff, enjoyed collecting steam engines, knives, handguns and cannons. He loved spending time with his grandchildren and family, his dog Luger, his friends, and his motorcycle club family.
Mark was preceded in death by his parents, Roland and Myrna Roemer and his pitbulls Buster, Magnum, Colt, Snicklefritz, Fritz, and Baby Doll. He is survived by his wife, Debra (Riney) Roemer, a step-son Jared McHugh and his wife, Jennifer, two grandchildren: Ash Martin and Maverick McHugh, two brothers: Larry Roland Roemer and his wife Karen, and Jeffrey Lee Roemer and his wife Ann, a sister-in-law and her husband: Ruth and Brian Scott, a close niece: Jessica Roemer, and his nieces and nephews Keith Roemer, Penny Roemer, Randy Scott and his fiancée Michelle Kempf, their daughters Cassi and Abbi Hartigan, Kristen Scott and Anessa Roemer.
Memorial services will be at 1:00 pm on Friday, August 28, 2020 at Greenlawn Funeral Home North. Visitation will be one hour before services, from Noon to 1:00 pm. Memorial donations may be made in lieu of flowers to B.A.C.A, Biker’s Against Child Abuse.