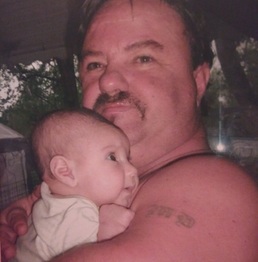 Marlin Eugene Dill, Age 58, Earned his wings Friday February 21st. Marlin went to rock heaven at 1:30 am surrounded by his loving family. Marlin was born in Springfield Missouri, May 17th 1961 to Clarence Dill and Della Dill. Marlin fought a long battle of stage 4 sarcoma cancer and bone disease. Marlin survived by his loving wife Dawn Dill, his three daughters; Rosella Renee Blakely &(son in law Kory Blakely), Jennifer Payne, Samantha Fickle &(son in law Levi Fickle) and his Three Grandsons; Muggy Doo (Dre Blakely), Austin Fickle, and Jr.Blakely. Marlin loved his wife and his girls and grandkids more than anything. He loved spending his time surrounded by them. He loved taking them on family camping and fishing trips and taking them to car shows and races. Marlin loved his rock music and his “Big Daddy Woo-Woo dance moves” as he called them. Marlin loved working on cars with his girls. Marlin was a huge family person and made sure his girls and grandkids grew up loving the holidays like he did and how to Rock-n-Roll. Marlin will be dearly missed by his family. He leaves behind 4 sisters; Nancy Johnson (brother in law Philip Johnson), Lois Lillard (brother in law Jack Lillard), Delores Fosburgh, and Lisa Dill and three brothers; Clarence “David” Dill, Joseph Dill (sister in law Sue Dill) Merle Dill and many nieces and nephews. Marlin is proceeded in death by; his twin boys, his dad Clarence Dill, Sister Rozella Dill, Brother Harlan Dill, Brother in Law Louis Fosburgh, Sister in law Sissy Hilburn and Nephew Adam Hilburn.
A visitation for Marlin will be held at Greenlawn Funeral Home North on Saturday, February 29th, 2020 from 1:00 p.m. to 3:00 p.m. with a funeral service following immediately afterwards. Interment will follow the Funeral service at Greenlawn Memorial Gardens.
In lieu of flowers, the family ask that donations be made to St. Jude Children’s Research Hospital.
Marlin will be dearly missed.
“Your wings were ready but our hearts were not!”
May 17th 1961-February 21st 2020