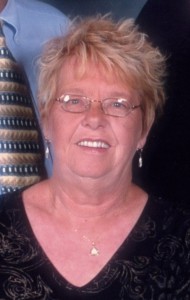 Marsha Ann Basham died on October 28, 2015 at Cox Hospital in Branson, Missouri. She was born on August 6, 1947 in Miami, Florida the daughter of Ernie and Margaret Stewart Nevel. She traveled around the country and Puerto Rico while her father pitched for minor and major league baseball. Baseball continued to play a big part of her life as she was a season ticket holder for the Springfield Cardinals and a fan of the St. Louis Cardinals.
Marsha was known as the “Whistling Breakfast Lady” to the visitors staying at the Quality Inn on Highway 76 in Branson. She loved serving breakfast and forming long term friendships with the guests. She lived the motto “Faith, Family, Friends”. Marsha was a member of the Victor Baptist Church and served as the children’s church teacher for 35 years. She was also a member of the Branson-Hollister Lions Club.
She is survived by her husband, Dwain Basham of the home. Three daughters: Katherine Hannawalt (Shane), Erin Huff (Devin) all of Mincy, Missouri and Susan Gregory of Seattle, Washington. One brother, Jim Nevel (Dawn) of Ozark, Arkansas. Five grandchildren; Evan Hannawalt, Beau Hannawalt, Ryan, Jacob and Morganne Huff and countless friends. She was preceded in death by her parents.
Funeral services will be at 11:00 AM, Saturday, October 31, 2015 at Victor Baptist Church at Branson with Pastor Kenny Robinette officiating. Burial will be later in the Missouri Veterans Cemetery in Springfield. Arrangements are under the direction of Greenlawn Funeral Home in Branson.
A visitation will be at 10:00 prior to the services at 11:00 AM at the church.
Memorial contributions are suggested to the Victor Baptist Church in her memory.