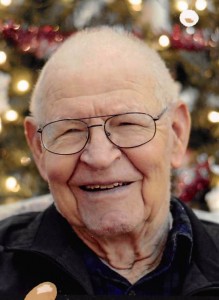 Marshall Arthur Broome went to be with his heavenly father on January 29, 2016. He is reunited with his wife Floy of 73 years. He was born in Franklin County, Georgia on August 22, 1921. He was a loved resident at The Baptist Home on Ozark, Missouri at the time of passing.
Marshall is survived by his three children Laura Jensen and husband Ralph of Longwood, Florida, Bob Broome and wife Judy of Bella Vista, Arkansas and Vickie Wright and husband Dennis of Ozark, Missouri. Marshall is also survived by his 8 grandchildren, numerous great grandchildren and his brothers James, Morris and Stanley.
Marshall resided in Orlando, Florida most of his life before moving to Springfield, Missouri in 2006. He owned and operated Broome’s Auto Paint and Body Shop for several years before going into the Insurance business where he worked as a Claims Specialist for many years until he retired.
Marshall was a welder during WWII. He could repair or make most anything. He would often be found at the church working with his hands and heart. He loved to play guitar and harmonica. He got his first guitar as a young boy after he saw a man on roller skates playing both a guitar and harmonica at the same time. He spent most of his life entertaining people with his jokes and stories, he even taught harmonica at The Baptist Home where he resided as the local entertainer.
Marshall loved the Lord and loved to serve as he was a deacon in the church for many years. He loved his friends at Second Baptist Church in Springfield and his friends at The Baptist Home.
In lieu of flowers the family requests donations be made to The Baptist Home located at P.O. Box 1040, Ozark, Missouri 65721.
Visitation will be at The Baptist Home, Ozark, Missouri Tuesday February 2, 2016 from 11:00 a.m. until service time at 1:00 p.m. with Chaplain Tommy Harper officiating.